Your better smelling garbage teen horror pic courtesy of Diablo Cody’s (“Juno”) more sophisticated screenplay and director Karyn Kusama’s (“Girlfight”/”Aeon Flux”) rather insufferably appealing shock-fest presentation that plays out as a lusty bad girl action story with comical undertones that delivers the bitchy sleaze and the bloody set pieces but does not produce the chills or the suspense.

Pretty, stuck-up and mean-spirited slut Jennifer (Megan Fox), a high school coed, is overflowing with confidence in her sexual allure and vamps any boy she wants to in her small-town of Devil’s Kettle, Minnesota. Needy (Amanda Seyfried) is Jennifer’s nerdy, smart, bespectacled best friend, who indulges her friend in some Sapphic pleasures when not under the covers with her attentive condom prepared nice guy nerdy boyfriend Chip (Johnny Simmons).

The underaged girls while one night at the town’s only bar, escape a deadly freakish fire that destroys the dive and kills a few customers. Also escaping the fire is an aspiring poseur Satanic city rock band, Low Shoulders, whose crass lead singer (Adam Brody) takes advantage that Jennifer has the hots for him and with the band take her out to the landmark waterfall for fun and games that results in a Satanic virgin sacrifice as the band make a deal with the Devil–but Jennifer undergoes a “demonic transference” when it turns out that she’s no virgin, as she led them to believe. Later that night Jennifer turns up at Needy’s house, dripping blood, vomiting bile and acting ghoulish (sporting the succubus look seen in many a second-rate horror pic). The next day, our Jennifer is back in class looking and acting her usual sexy and evil self. But Needy begins to sour on her “sandbox” friend, who has a cold attitude toward many of her male classmates suddenly discovered brutalized by cannibalism. Jennifer now relishes her role as a demonic creature courtesy of the evil and ambitious rockers, and the female friends begin to go their separate ways to navigate through “teenage hell.”

Amanda Seyfried is grounded in her character presentation of someone who can believably go from a normal teen to a violent inmate in a mental hospital, seemingly overnight. She keeps the bloodbath pic far more interesting and entertaining than I thought it had a right to be. 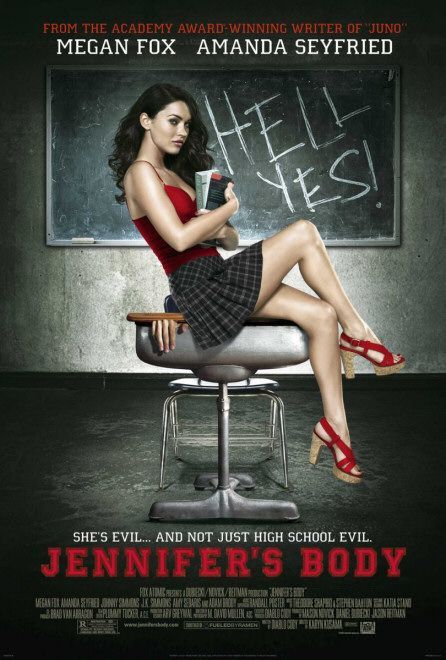