“Takes its title from a recruiting poster, which should tell you where we’re going with this pic.”

I Want You takes its title from a recruiting poster, which should tell you where we’re going with this pic. Mark Robson (“Edge of Doom”/”Return to Paradise”/”Nine Hours to Rama”) directs this doleful psychological family drama that’s scripted by Irwin Shaw and based on New Yorker stories by Edward Newhouse. It investigates the effects of the Korean war on a small-town family in the construction business. Its producer Samuel Goldwyn’s attempt to tap again into the same success he had with the stirring Oscar-winning post-WW II drama The Best Years of Our Lives (1946), telling of soldiers trying to adjust to civilian life. But I Want You fails to get the same results, as it uses the more controversial Korean War as background and the flag-waver story doesn’t unfurl with the same resonance.

It’s set in a small town in Connecticut. WW II veteran Martin Greer (Dana Andrews) is a big-time contractor with a loyal wife, who speaks her mind, named Nancy (Dorothy McGuire) and two children, who runs the family construction business with his World War I veteran father Thomas (Robert Keith). Despite the pleas of devoted father George Kress, Sr. (Walter Baldwin) to his boss Martin to classify his son George Kress, Jr. (Martin Milner) as “indispensable” to the company so that his son will not be drafted for the Korean War, he’s turned down. The family spat in the Greer household starts when Martin also refuses to vouch that his younger carefree brother Jack (Farley Granger), who works for him, is indispensable as an essential occupation and he gets bitter about being drafted. Martin wrestles with his own patriotic feelings and agrees to join the war effort once more after being urged to do so by an old retired colonel war buddy (Jim Backus). Martin proclaims that he volunteers because he wants to be able to face his children if they ask him, “What were you doing, Daddy, when the world was shaking?”

It has a number of vignettes indicating how war upsets the lives of average Americans. Jack’s college student girlfriend Carrie Turner (Peggy Dow), daughter of patriotic Judge Turner (Ray Collins), refuses to marry him, saying she wants to finish college first. But when Jack changes and gets a better military attitude in the years he serves and becomes less selfish, this melts Carrie’s heart and she agrees to tie the knot. But George Kress, Jr. is not so fortunate, he remains an M.I.A. and his dad blames Martin.

Though the film is dated and failed to connect with the impact intended, it still has fine performances, is earnest in its approach to understand how these characters think and provides a striking look back at the changing American attitudes towards patriotism after World War II. 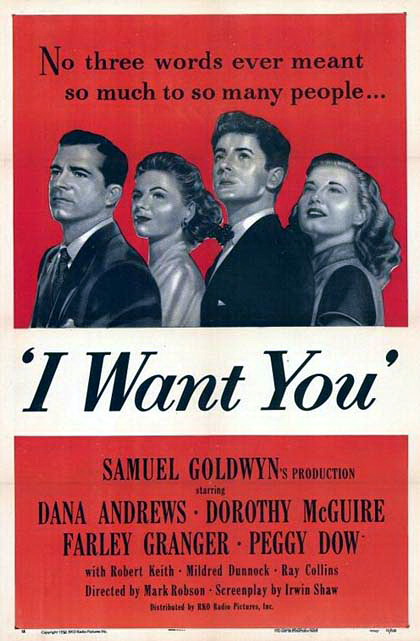