Robert Wise (“The Set-Up”/”The Andromeda Strain”/”Star Trek-The Motion Picture”) tries to do another West Side Story, but this romantic musical drama about homeless Manhattan teens living on rooftops doesn’t reach any heights. It’s a hard-to-swallow fantasy tale written by Terence Brennan from the story by Allan A. Goldstein & Tony Mark. The all too familiar formulaic tale about these unlikable teen-agers on the wrong path but capable of doing good looks phony even if it’s not quite as phony as it looks. There’s plenty of choreographed dancing and rock music supplied by the Eurythmics, Grace Jones, Etta James and many others.

It tells the story of the low-key, white, orphan, teen-ager martial arts practitioner T (Jason Gedrick), who lives in the ghetto in the Lower East Side in a water tower that sits on top of an abandoned tenement building. There’s a whole community of teens living in abandoned tenements in the dangerous alphabet neighborhood (Avenues A, B, C and D) that’s infested with crime, burnt out tenements, poverty and drugs. Another leading character is named Squeak (Alexis Cruz), a young graffiti artist who joins the rooftop crowd after a spat involving his mother’s live-in boy friend. The lost teens hang out every night in a vacant lot named ‘The Garden of Eden’ and engage in what’s called ‘combat dance’ (a stylized offshoot of the Afro-Brazilian martial arts slave dance practice of Capoeira, which has the combatants or dancers try to kick each other off a stage with no physical contact).

When T’s abandoned building is taken over by vicious local drug dealer Lobo (Eddie Velez) and turned into a crack house, T takes a stand to rid the the neighborhood of the sadistic drug dealer. There’s also the matter of the recent girl T is attracted to, the Hispanic Elana (Troy Beyer), who has a history with Lobo and his ruthless gang as their lookout and must pass T’s loyalty test before becoming his steady. The action picks up with kids hurled off rooftops and water towers blown up, and a good old-fashioned turf war ala West Side Story. T and the filmmaker seem to want us to believe that once the crack house goes these misunderstood teens, only involved in petty anti-social activities (such as stripping cars, dropping out of school and graffiti), will be just fine when left alone to live out a libertine heavenly rock and roll fantasy life. The darn thing ends with a gigantic dance celebration for the neighborhood kids who show us how to ‘rock on.’ But the simple-minded message fell through the rafters and left no impact on me except on how absurd and unmoving it was despite its heart being in the right place. 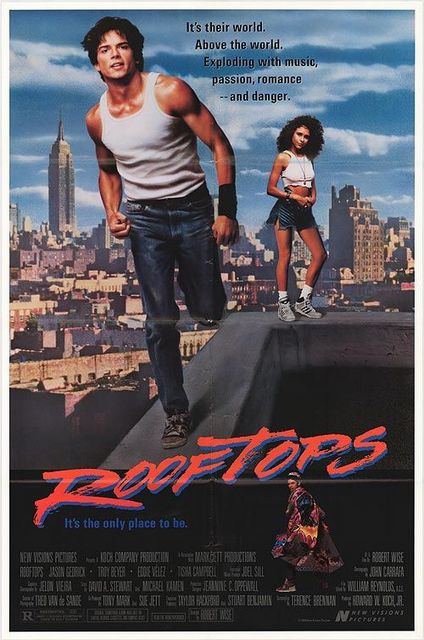