IT SHOULD HAPPEN TO YOU

“A “My Friend Irma” type of dumb blonde comedy, that is expertly performed by Judy Holliday.”

A “My Friend Irma” type of dumb blonde comedy, that is expertly performed by Judy Holliday. It’s filmed in black-and-white. Playwright Garson Kanin comes up with a clever idea for a spoof fame. It’s about a nobody wanting celebrity without earning it, and finding a novel way to advertise herself by buying space on a billboard. The gentle satire shows the power of advertising. The heroine simply seeks fame to be “above the crowd,” and becomes obsessed with fame to the point it starts leading her down a dishonest path. After a fast start there’s nowhere to go with the ongoing one-note joke, as it runs out steam. Also it never takes as big a bite out of TV and the advertising world as it could and should have, but it has its funny moments throughout. George Cukor (“Little Women”/”David Copperfield”/”Gaslight”) directs by just pointing the camera at Holliday and letting her be ditsy (which she’s as good as it gets doing that shtick). It was the fifth and final collaboration between Cukor and Holliday. Jack Lemmon, who appeared on Broadway and television, makes his movie acting debut a good one and acts under more restraint than he would normally do at a later stage in his career.

Holliday and Lemmon sing as a duet “Let’s Fall in Love,” which was written almost 20 years earlier by Harold Arlen and Ted Koehler.

While struggling documentary filmmaker Pete Sheppard (Jack Lemmon) is using his hand-held 16mm camera to make a film about people enjoying Central Park, he films Gladys Glover (Judy Holliday) feeding the pigeons. Gladys is visiting the park because she’s despondent that she just got fired from her job modeling girdles and is thinking of suicide or going back home to upstate NY to begin a probable loveless marriage and a job in a shoe factory. What saves her is that after running into Pete she suddenly realizes that all she wants is to be famous. With the thousand dollars she saved up, she rents a large billboard on the choice spot overlooking Columbus Circle for the next three months and has her name painted on it in huge letters. That happens to be the spot that Adams Soap usually reserves for its advertising purposes, but through an oversight failed to make the arrangements. The company’s smooth talking womanizing bachelor CEO, Evan Adams III (Peter Lawford), tries to get back the space by offering Gladys money and then trying to court her, but he finally agrees to give her six billboards for that one choice space and also promotes her across the country as the Adams Soap “Average American Girl.” Fame suddenly comes to Gladys who is pursued by TV talk show hosts and by the reporter (Michael O’Shea), who becomes her handler as the cynical guy knows how to sell her fame for quick bucks at public appearances.

It winds down with Gladys having her fill of vacuous fame to realize “It’s not just making a name, but making a name stand for something.” So in the middle of her whirlwind publicity campaign she quits to marry the solemn Pete, who disapproves of her using money to splash her name all over town.

The amiable lightweight comedy hits a home run by getting the jump on other films at looking at media manipulation, corporate manuevering and how the nature of fame is so crassly sold to the public. It feels just as fresh and relevant today as it did in 1954, as the idea of becoming a great celebrity without having any talent still runs rampant across a big chunk of American society (think Paris Hilton or of all those current popular reality TV shows). 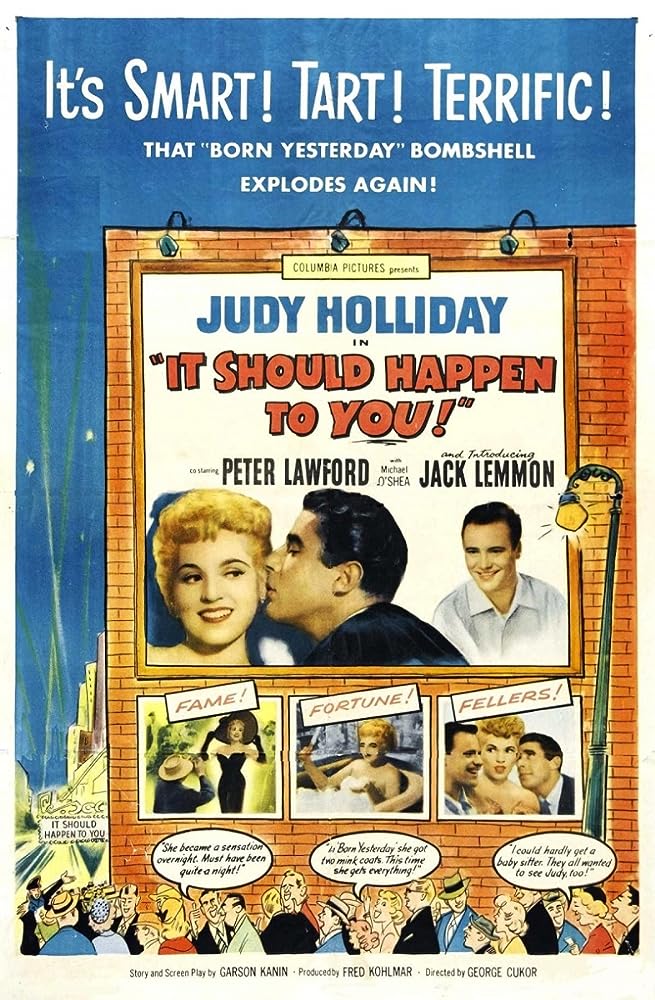