“The lively musical comedy has splendid dancing, but the story is not so splendid.”

The lively musical comedy has splendid dancing, but the story is not so splendid. It plays out as a spoof on bad television programs and hard-sell advertising, and offers its cynical take on the world of business. The mixture of happy music and somber storytelling didn’t go over with the public, who didn’t support the film. After a fourteen-year relationship, Stanley Donen and Gene Kelly codirect their last musical together and because of bitter fights over artistic matters during filming also ended their friendship. This is a follow-up (not a sequel) to their hit musical On the Town (1949), the duo also codirected Singin’ In The Rain (1952)–their greatest film and a true classic. The story in It’s Always Fair Weather, like the other films they codirected, is also written by Betty Comden and Adolph Green. The writers in this one replace the sailors with soldiers. The reason being is that the sailors with Gene in On The Town, Frank Sinatra and Jules Munshin, had other commitments and weren’t available.

Three old World War II soldier buddies–Ted Riley, Doug Hallerton and Michael Kidd (Gene Kelly, Dan Dailey, Michael Kidd)–meet for the first time in ten years in Tim’s Bar and Grill in NYC as arranged when they returned from the war on October 11, 1945, and find that things have drastically changed for them compromising their once close friendship.

A now stuffy grey-flannel attired Doug has plenty of dough but is unhappy. He lives in Chicago and is no longer a painter or a free-spirited guy, but has traded in his dreams to be an artist to become instead an ad man veep who suffers from ulcers and whose wife wants a divorce from their childless marriage. Doug designs animated-mop characters to sell products like “Klenzrite.” Angie is a hick from Schenecdaty, in upstate NY, who has become small-minded. He owns a roadside hamburger stand with the overblown ritzy name of The Cordon Bleu, and is a happily married family man. Their leader, sergeant Ted, is the biggest disappointment. He’s a bachelor living in NYC, and has led a disappointing life as a knockaround and is now involved with low-life crooked gamblers and promoters as he manages a promising prizefighter, Kid Mariacchi, who he believes is his ticket to big money. The other two easily spot that Ted has become a heel. While dining in a high-class club, compliments of Doug, Ted makes a play for one of the restaurant patrons, the attractive Jackie Leighton (Cyd Charisse), another advertising person, who works for the same company as Doug. Jackie’s a production aide on the hit live reality TV show Midnight With Madeline, starring the insincere sugary hostess Madeline Bradville (Dolores Gray). Smelling a good story over the soldier reunion, Jackie works her tail off to keep the three alienated friends from splitting and secretly gets them there for that night’s performance to make their story the show’s subject. In the process Ted and Jackie fall in love, and the comedy works overtime to show how crass and manipulative both television and the advertising business can be. In the final act, the boys join forces together to help Ted fight back against crooked fight promoter Culloran (Jay C. Flippen), who spoiled the fight game for Ted by having his fighter setup to take a dive. It ends in a climactic fistfight that is seen on the live TV program (a parody of the 1950 show This is Your Life), as the three soldiers unite again to take on the racketeer Culloran and a couple of his goons.

The heart of the film follows the trio and their misadventures after their 10-year reunion and how each is disillusioned with life and how each has strayed from their dreams and their former sincerity. In the end, the film ends on an optimistic note as the boys will now try and live more honest lives.

What keeps this film in step is its terrific dance and musical numbers. It’s wonderful to see Kelly, Dailey and Kidd hoofing with garbage can lids on one foot; Kelly roller skating over the city streets while love sick; Dolores Gray knocking off a male chorus line via trap doors and exploding stage props; Gray singing the sparkling song “Thanks a Lot But No Thanks;” Charisse in a sexy dance (“Baby, You Knock Me Out”) taking place at Stillman’s Gym; Dailey while soused singing a dandy little ditty called “Situation-Wise” to a bunch of hucksters; and the engaging ditty sung by the trio of “I Shouldn’t Have Come.”

Some other songs include “March, March,” “Time for Parting,” “Stillman’s Gym,” “Once I Had a Friend,” and “I Like Myself.” 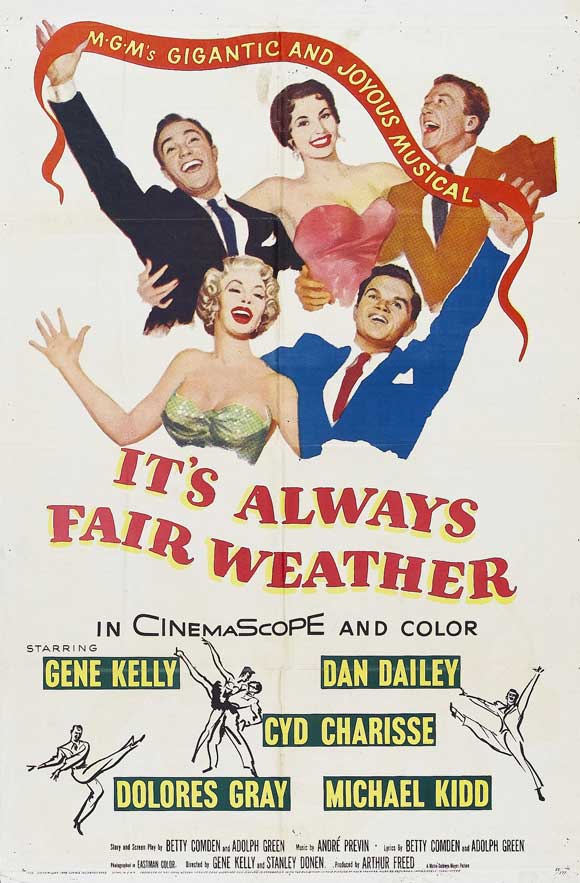