French filmmaker René Clair (“Break the News”/”The Ghost Goes West”/”I Married A Witch”) is an exile from Fascist tyranny and a war-torn Europe when he arrives in Hollywood (from 1935 to 1945) to do lightweight escapist fantasy films like this appealing but leaden one. The film dabbles in silliness over its diverting and promising premise, which it keeps going without managing to be that witty, funny or telling in its social commentary. But it’s engaging, good-hearted and meticulously crafted nonsense. There are a few skits that prove entertaining even if the over all effect of the film is strained. The public ate it up, and it was very well-received.

It Happened Tomorrow opens with the framing device of a golden wedding anniversary celebration in a mansion with a large family at the foot of the stairs and the descending grandparent couple, newspaper publisher Larry and Sylvia Stevens (Dick Powell and Linda Darnell), taking a moment at the top step to recall a miraculous event that occurred fifty years earlier when they first met and immediately decide no one would believe them if they revealed what took place so they decide to remain mum as the film goes into flashback.

It’s set in 1890 in an unnamed Middle American town, where cub reporter Larry Stevens (Dick Powell) works for the Evening News and tells old timer colleague Pop Benson (John Philliber) that he would love to know tomorrow’s news so he could get the scoop on the other reporters. That night the ghostly figure of Pop arrives to deliver to him alone tomorrow’s newspaper. When it snows that May day as one of the headline stories from the miracle paper reads, Larry figures there might be some truth to this advanced paper. But Larry fails to convince his publisher Mr. Gordon (George Cleveland) to send him out to cover the newspaper’s other headline story of the daring robbery by three men of the opera house, and when he insists he gets fired. So Larry escorts his lovely date, Sylvia Smith (Linda Darnell), the magician’s assistant who works a fake mind reading act with her overbearing Uncle Oscar Smith aka Gigolini (Jack Oakie), to the opera house. The robbery occurs as it was written in the paper Larry received, which impresses the boss who rehires him and makes him his ace reporter saying he has a nose for the news. But Inspector Mulrooney (Edgar Kennedy) is suspicious of how Larry knew this and holds him overnight for questioning at the precinct house. When Larry receives another tomorrow’s paper, he has the cops follow the headline and wait for these same bandits at the Union Bank and becomes a hero when the crooks are arrested. The third and last tomorrow’s newspaper Larry receives from Pop, who died three days ago, he uses to pick winners at the race track, as he needs those winnings as a nest egg because he impulsively married Sylvia even though they just met. The headline story is that Larry will die in a hotel lobby shootout with cops that day, and the reporter puts all his energy into avoiding that inevitable conclusion. The filmmaker cleverly comes up with the answer to keep the Larry we knew from the opening scene alive: the early edition had been wrong. 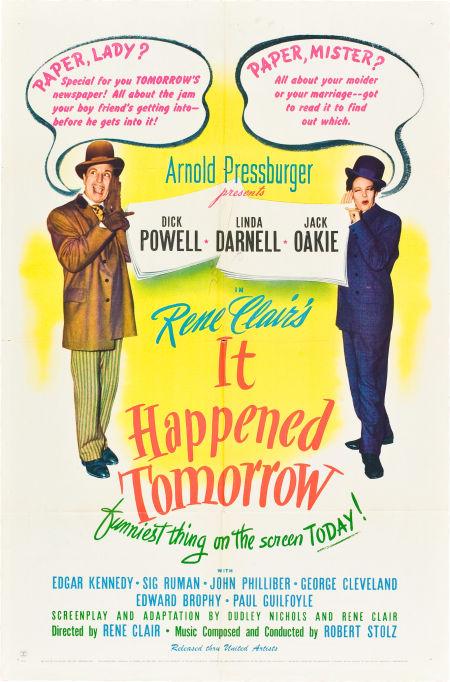