The last film produced by the Val Lewton of “Cat People (42)” acclaim and many other great small-budget horror films, is not one of his great ones but it’s snappy. He died of a heart attack at age 46 before Apache Drums was released. It’s the kind of effective kickass B western where the cavalry comes in the nick of time to rescue the white folks from the attacking Indians. Director Hugo Fregonese (“Untamed Frontier”) gives a nod to Lewton’s eye for detail and shadowy photography and bases it on the novel “Stand at Spanish Boot” by Harry Brown. David Chandler turns in a crisp screenplay that’s always tense and filled with exciting action sequences except when he keeps things too chatty, which tamps down the narrative with a dull soap opera romantic feud.

In 1880, an Old West mining border town named Spanish Boot is experiencing a minor boom and the Welchman, Reverend Griffin (Arthur Shields), has the strapping blacksmith/mayor Joe Madden (Willard Parker) give the boot to Betty Careless and her dance-hall gals. Also given the boot on the same day is the slick gambler Sam Leeds (Stephen McNally), who fatally shot a man drawing on him during a card game. On the desert trail, Sam finds Betty and the girls slaughtered by the Mescalero Apaches in their buggy carrying them to Silver Springs. Sam returns to warn the town, but Joe doesn’t believe him. He says word from the nearby fort is that the Apaches crossed the border to Mexico. But when the stagecoach arrives with everyone slaughtered by the Apaches, Joe reluctantly concedes that his rival was telling the truth. It seems they are both taken with the hot looking redhead Sally (Colleen Gray), who runs the only wholesome bar/boarding place in town. Sally ditches Sam for the square, priggish Joe, saying she really loves Sam but won’t live with a gambler. She laments about always loving the bad guy she wants to change but can’t.

The proper citizens are Indian haters, and don’t seem to see anything wrong about this. They will not serve liquor to an Indian and the reverend says they’re the “Devil’s creatures.” The filmmaker does a good job pointing out the white man’s intolerance for the Indians and that their savagery is in large part a response to this blind bigotry. A small band of troops arrive led by Lt. Glidden (James Griffith), but he’s the only survivor after an Apache attack and joins the remaining townspeople hiding in the church. There the gambler does magic tricks to calm the frightened children, Sally has them singing ‘Oranges and Lemons,’ and, while the Apaches beat their drums and do a war dance preparing to attack in droves, the reverend leads the outnumbered settlers in singing a Welch fighting song called ‘The Men of Harlech.’ Pretty darn good stuff for such a modest western, showing that it takes all kinds to be brave and that the worst situation might bring out the best in a man. 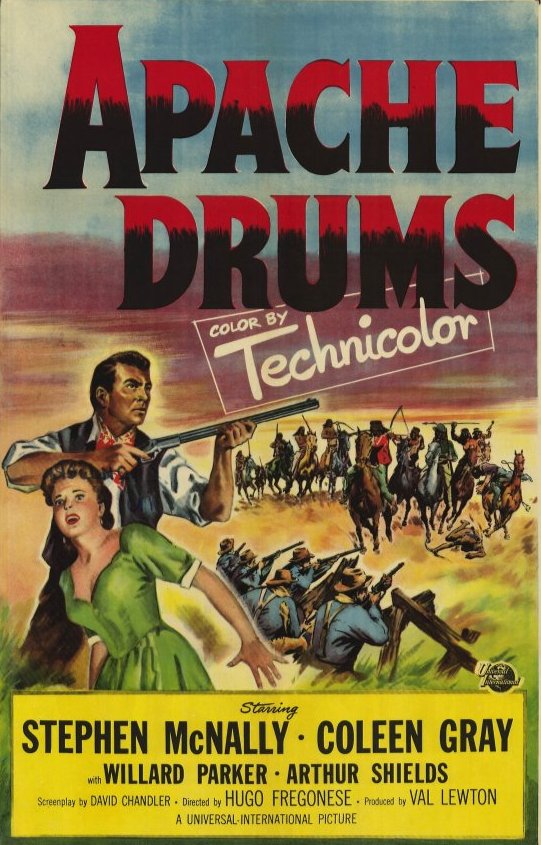