I SAW WHAT YOU DID

William Castle (“The Tingler”/”Strait-Jacket”/”Homicidal”) directs a nifty little thriller and without his usual gimmicks. It’s based on the novel by Ursula Curtissand is written byWilliam P. McGivern.

When the California suburban couple, the Mannerings (Leif Erickson & Patricia Breslin), go on an overnight trip to Santa Barbarathey have no choice but leave their teenage daughter Libby (Andi Garrett) as babysitter for their 9-year-old daughter Tess (Sharyl Locke) because their regular babysitter comes down ill. Libby’s teen friend Kit Austin (Sarah Lane) keeps her company. The playful and giggling teens call strangers picked at random from the telephone book and Libby says “I saw what you did, and I know who you are.” The prank turns into a horror story when they pull it on psychopath Steve Marak (John Ireland), who has just brutally killed his wife in the shower while arguing and finished burying her in a nearby wooded area. When Steve returns home, he’s surprised to find his love sick older neighbor Amy Nelson (Joan Crawford) coming onto him. That’s when he gets Libby’s alarming call, who disguises herself as Suzette. It’s a call which he takes seriously, and that sets in place all the upcoming horror pic frights.

The three silly girls were just terrific, and make everything believable and scary. 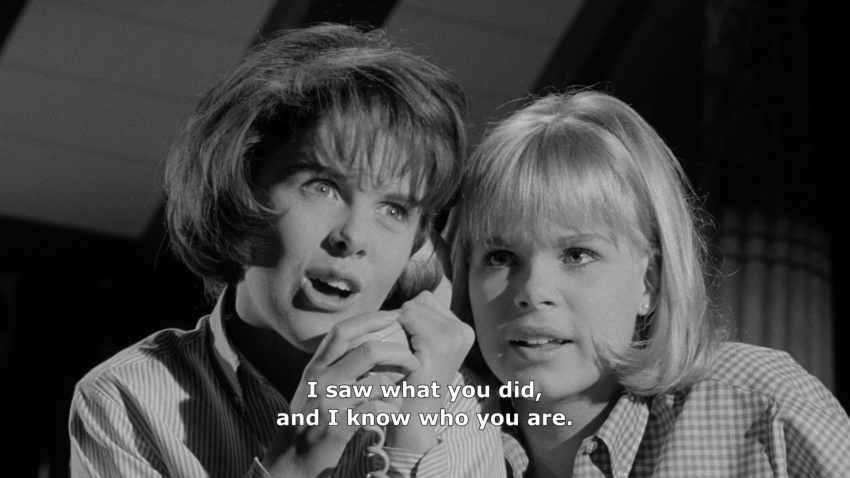