“Visually pleasing in its mythic images, and it’s heartfelt narrative is both stirring and poetic.“

The 33-year-old Mohammad Rasoulof(“Head Wind”/”The Twilight”/”The White Meadows”)writes and directs this amazingly uplifting and comical allegorical film that encompasses modern day politics in Iran, the battle for law and order and the homeless struggle to survive. It’s visually pleasing in its mythic images, and it’s heartfelt narrative is both stirring and poetic.

Self-appointed Captain Nemat (Ali Nasirian, celebrated Iranian actor and playwright), a Captain Nemo figure, is the kindhearted despotic patriarchal leader of a motley crew of homeless survivors, mostly those ignored from the Iran-Iraq War (many are widows with a large family). They are Iran’s Sunni-Arab minority, who live on a run-down oil tanker moored on the Persian Gulf close to land. Whatever the practical-minded and optimistic captain says goes aboard the ship. If not, we are led to believe that there would be chaos and ruin. No one pays rent in this socialistic utopian arrangement, as they instead settle their accounts by having each tenant’s wages deducted to help pay the maintenance tab of the ship. The captain has a baker on the premises, a classroom for the children’s education, a cell phone service, ointments for the residents and other amenities in the so-called Iron Island.

The floating shanty-town presents many problems such as the ship’s teacher discovering that the tanker is slowly sinking; an orphan boy (Hossein Farzi-Zadeh), the captain’s protégé, disobeys the captain who gave him a home and tries to run off with a resident fisherman’s daughter (Neda Pakdaman) who was promised to an older gentleman with a source of income on the mainland, which means the lad has to be severely punished by the captain as a lesson to the others; and, there’s the big problem, the ship’s real owners intend to sell the tanker for scrap. The captain, who is trusted by all the residents in the ad hoc community, gets the people to give him ‘power of attorney’ and schemes to sell the boat for land and to thereby build on the barren land out in the desert a new town. Which leads to an ambiguous ending, where a glimmer of hope prevails as long as the can-do elderly captain is around to manage things.

The ship symbolizes how a backward industrial country must learn to survive and prosper without natural resources. There are also anti-war messages throughout from the teacher asking the children to not think negatively about fighting enemies to the teacher making chalk from old bullet casings. But the picture belongs to Nasirian’s overwhelming performance as the captain who knows how to treat his constituents, perhaps like those old politicians from Tammany Hall who stayed in office by being the paternal wheeler-dealers and not always being on the level with their childlike followers. The film firmly believes in its faux naïveté premise that utopias only survive through authoritarian leaders who form communities in isolation, which is debatable but not according to the way the film sets up its political agenda–as it follows the lead of its benign despot and leaves no room for debate, which seems to be a precariously dangerous philosophy to get trapped into believing without questioning its ramifications. 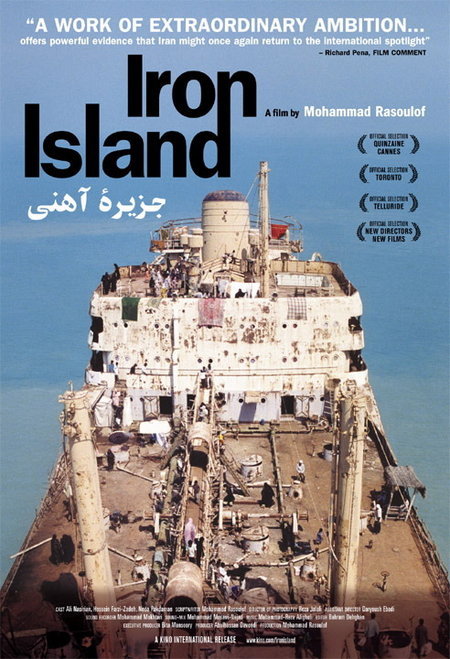