It’s set in the near future of 2012, at a time the economy is down and big corporations run things in the country. The ex-con and former race driver champ and laid-off steel-plant worker Jensen Ames (Jason Statham) is home when his wife (Janaya Stephens) is killed by a masked intruder and Ames is framed for the murder. Imprisoned at Terminal Island, the drab home of the Death Race, that’s run by the sadistic warden Ms. Hennessey (Joan Allen). She tells Ames that he will replace the disfigured masked rider Frankenstein (Voiced by David Carradine) and pretend to be the popular Frankenstein, who was killed in the last race by prison racing rival Machine Gun Joe (Tyrese Gibson). She promises that he will not be recognized by wearing Frankenstein’s metal mask. We learn that the prison is run for profit like a corporation and the 3-day race appears on the Internet as a pay-for view profitable venture. In his turn, if Ames wins he goes free. The catch is if he loses he dies. The only ones knowing about the deception are the chief guard (Jason Clarke) and the Ames pit crew consisting of head mechanic Coach (Ian McShane), the brainy Lists (Fred Koehler) and the loyal Gunner (Jacob Vargas).

Allen delights us when she says things like “OK, -sucker. Fuck with me and we’ll see who shits on the sidewalk.”

It’s a bad film, with trashy dialogue, terrible acting and an awful story. Things never look better than an auto wreck. The race is filmed (in Montreal) as a videogame, with metallic looking CGI images being the film’s stylish look. 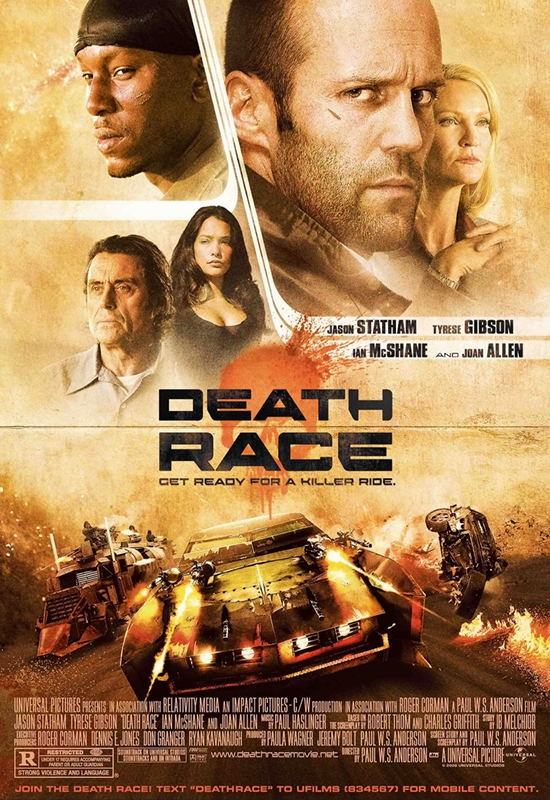