I ONLY WANT YOU TO LOVE ME (Ich will doch nur, daß ihr mich liebt) TV

“For the fatalist Fassbinder, this is typical fodder for him to sink his teeth into.”

Rainer Werner Fassbinder directs this downbeat morality tale for German TV about a hardworking bricklayer unable to overcome growing up in a cold Bavarian family and falling into serious trouble with the law. It’s based on the book Lebenslaenglich (“Life Sentence”) by Klaus Antes & Christiane Erhardt, that featured a real-life interview with a convicted murderer. It’s told in flashback as Peter (Vitus Zeplichal) is being interviewed by an unidentified woman, obviously a prison psychiatrist (Erika Runge).

The film follows the timid and psychologically fragile Peter from his adult days living with his unaffectionate cafe owner parents in the Bavarian Forest and building for them a lovely house. They show him love for just two weeks after the house is built and then go back to their loveless old ways. Peter in the meantime marries a virgin, Erika (Elke Aberle), who works in a chemist’s. Wanting to show his parents that he could make it on his own, the couple move to Munich–the most expensive city in Germany. Peter gets a construction job that doesn’t pay well, but he impresses the bosses because he’s such a hard worker and gets by only because he works overtime and never takes a day off. He’s driven to give his wife what others have and gets caught up in the big-city consumerism by buying everything on the layaway plan. This causes him to go in debt. Peter feels he would rather die working than begging his father for money. When a baby comes along and overtime dries up, Peter is unable to cope with the sudden change and commits a senseless murder and receives a ten year sentence.

This deliberately paced tale is didactic but very effective in showing the great gulf in the class divide due to economics, how the worker is exploited, the coldness of the materialistic-minded world and the fragility of a psyche weaned without parental affection. For the fatalist Fassbinder, this is typical fodder for him to sink his teeth into. The dutiful son and exemplary worker shrivels up when he feels he’s letting his parents and wife down by not being able to support his family, and would rather die than not have their love. 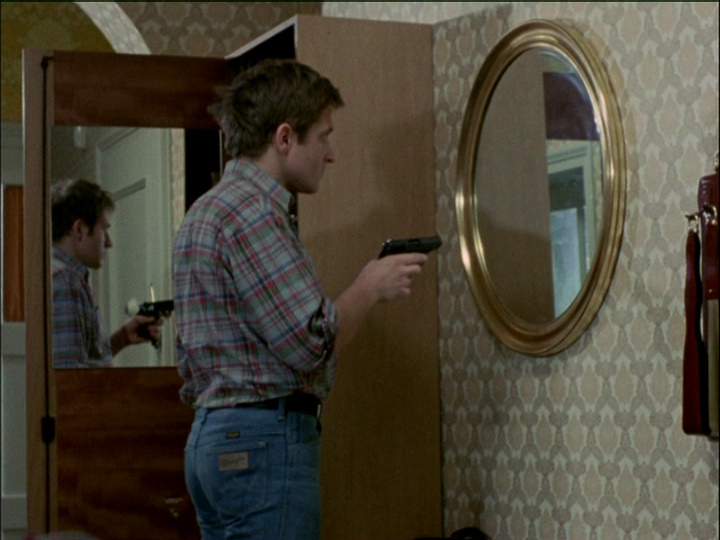