A confused teen travels in 1976 to Europe to investigate her older sister’s mysterious suicide in 1970. The Invisible Circus is adapted from a Jennifer Egan novel. It’s one big cliché of sentimental drivel and it’s a chore to watch. Phoebe (Jordana Brewster) leaves her comfortable home and widowed mom (Blythe Danner) in San Francisco and traces her politically radical sister Faith’s (Cameron Diaz) European steps in Holland, France, Germany, and Portugal. Phoebe is fixated on having been born-too-late and therefore missed the hippie revolution and thinks her life is now meaningless. The film’s plagued by a general emptiness, trite dialogue, a lethargic script, listless direction and uninteresting performances. The story doesn’t even have a payoff when sis finds out what happened to Faith. There’s not one thing in this film to get excited about, and all the main characters appear to be tourists rather than participants of the protest movement.

The 18-year-old Phoebe misses her dead sister so much, she picks up her backpack and finds herself in drug-riddled Amsterdam to find out how she disappeared. But she draws a blank. In Paris she meets again Faith’s San Francisco boyfriend Wolf (Christopher Eccleston), the Britisher, who was studying at Berkeley when he met Faith. He’s now living with his new French girlfriend Claire and no longer has long hair or does drugs, but he’s still a sly fox. The puzzle starts to fit in place, as Phoebe learns that her free-spirited sister was despondent after her father died from leukemia. Faith blamed the disease on the big corporation dad worked for and that he was not happy he didn’t pursue a career in the arts.

Because of the protest movements during the 1960s, Faith gets swept up into the movement by becoming a rabble-rouser in the States and then in Europe. She also becomes heavily into drugs and when that and her prankish demonstrations can’t satisfy any more, she joins the terrorist Red Army and gets into violence. She later left Germany and threw herself off a cliff on to the coastal rocks of Cabo Espichel, Portugal. Phoebe wants to know why; and Wolf, who obviously knows what happened, tags along to help her find what she’s looking for at the suicide spot. Wolf also grabs himself some fine tail along the journey, seemingly more concerned about nailing Phoebe than in revisiting Faith.

Phoebe’s time-warped bereavement and investigation based on Faith’s postcards and memories of her from childhood are stiffly done. At one point Phoebe pines about why she feels so sad: “I am sure there was a time when everything was perfect.” Later on in Portugal, she laments to Wolf about what she missed out on: “You guys were reinventing the world every single day.” The film is actually as blank as the character Phoebe plays (not that Faith or Wolf were any deeper), and everything it tries to say or do seems out of place. By the film’s end the credulous Phoebe no longer reveres her sis, as she’s disabused of all the things she thought made her sister so great and liberated. But who cares, the characters were that dull and tiresome! 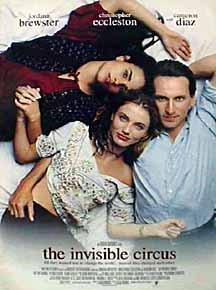