Werner Herzog’s (“Aguirre, the Wrath of God“) first narrative in about a decade after a series of documentaries is an intriguing but flawed work, that suffers only because it’s so woodenly presented. Otherwise, this is a unique visual work of great perception and power. His last fiction work was his dismal melodrama in 1991 “Scream of Stone.” Invincible is based on a true story about a Polish Jewish blacksmith from the shtetl, Zishe Breitbart (Jouko Ahola, a nonprofessional actor who is a Finnish strongman who in 1998 won the title of World’s Strongest Man). Zishe’s performances of strength made him recognized as the strongest man in the world and took the citizens of the 1932 Weimar Berlin by storm. The Jews in the need of some hope for the future, relished that one of them would show up the master race.

Zishe’s moving story is fictionalized in a conventional way. But when it remains simple as a mythic fable it dazzles in uncovering dirty little truths, as it wrestles with the societal decadence and of the struggle for power and identity in such uncertain times. It taps into the plusses and minuses of hero worshiping, the fakery of the occult and showbiz, the popular rise of Nazism among the masses through defects in the collective unconsciousness, and it looks at the downtrodden European Jewish population and tries to understand how they were not able to comprehend what the future had in store for them. It also has nice touches of the surreal, which sets up its dreamlike story to be like a somber fable. Herzog fights hard to get at that dark allegorical period of the last days of the Weimar Republic, the last days of hope for the Jews where Zishe believes that his strength and goodness have destined him to be the Jews “new Samson.” It’s a brilliant concept on paper but it never quite materializes on film as well as it could have, yet it’s still a mesmerizing work. Herzog got sidetracked with too many subplot issues that fell weakly by the side and he got stuck for the longest time on a romance that went nowhere. The puritanical strongman dreams about his dream girl only to find her in the real world and still their romance produced no sparks. Her name is Marta (noted international concert pianist Anna Gourari) and she turns out to also be an outsider in Berlin, a stateless Czech who works in the same cabaret as he does and dreams of playing a Beethoven piano concert with a full orchestra. She’s a concert pianist and a sex slave to Hanussen (Roth), her scaly boss with his greasy hair slicked back and a protruding jaw giving him an intense gaunt look. He poses as a Dutch aristocrat and shamelessly curries favor with the high-ranking Nazis by psychically predicting great things for Hitler and the rise of the Third Reich according to his visions. He’s hoping to head the Ministry of the Occult when they take power. Hanussen is an historical figure who would have had that unique Nazi post, if he wasn’t unmasked as a Jew. In the movie he’s betrayed by Marta, who upsets him when she refuses to prostitute herself to the “ugly clubfooted dwarf” Goebbels. Hanussen’s confronted by the protective Zishe who comes to her rescue and he is further tricked into taking Zishe to court to challenge his fraud allegation, as the oily police chief (Kier) enjoys this confrontation among his inferiors as merely another spectacle to keep the aristocrat entertained.

The film was in English, but most of the international cast sounded like they were constrained in that unfamiliar language. They had trouble putting even a basic English sentence together that didn’t sound dubbed, in contrast to Tim Roth’s clairvoyant charlatan character who articulated his chilling lines with a perfectly executed sinister tone. It’s a masterful performance as a ruthless magician and a self-hating Jew, one that’s unforgettable.

Zishe is the eldest child from a large religious Polish shtetl family who are content though living in near poverty and faced with anti-Semitic neighbors in their eastern Poland. His loving blacksmith father (Gary Bart, a real-life relative of Zishe’s, who tracked down this story) and mother (Renate Krößner) and many brothers and sisters celebrate the Passover with joy and thank God that at least the family is healthy and together. The naive and inarticulate Zishe is especially fond of his studious, storytelling, precocious 9-year-old brother Benjamin (Wein). He tells Zishe his favorite story about the rooster pretending to be a prince, a fable Zishe treasures wherever he goes.

At a traveling circus Zishe’s discovered by a sly theater talent scout (Wöhler) who convinces him to take the Berlin offer and leave home for the first time. He does his convincing by taking him and Benjamin to the cinema to see how optimistic of the future Berlin is, as the aerial shots of automobiles and big buildings and the bustling city were taken from a Zeppelin. Zishe makes the decision on his own to accept and ends up performing in an occult cabaret run by the exploitative mind reader Erik-Jan Hanussen. Zishe is coerced to perform acts of strength on stage at Hanussen’s Theater of the Occult as the Aryan “Siegfried, the Iron King,” appearing in a blond wig and a gladiator costume in order to appease the club’s largely Hitler brownshirt audience. On a visit from mom and Benjamin, he has a change of heart and tosses away his gladiator look to announce to the stunned audience that he’s a Jew. Zishe then experiences the fury of the Nazis anti-Semitism and starts dreaming about the evil days he sees ahead, trying to warn other Jews back in his own country but to no avail.

Herzog is a visionary who caught the insidious mood of the last days of the Weimar, before Hitler took power in January of 1933. But he shot himself in the foot by his awkward way of telling the story and its sluggish pace. But he also throws in pure Herzog visionary scenes, that are hard to figure out exactly what they have to do with the story but they are nonetheless fascinating. There’s one of Zishe and his father walking on the sharp stones of the beach where there are many red crabs crawling along (the crabs might be symbolic of the masses being led!!!) — it’s a scene pilfered from his own documentary Little Dieter Needs to Fly. The film closes, as Zishe dreams that Benjamin is flying (freedom comes from true knowledge not from following!!!).

Herzog caught how the collective unconscious desires of the German people were manipulated at the time, as he showed that the use of mind-control is similar between show people and politicos. He showed how a showman is no different than a politician who gives the people what they want (comparing the false skills of the occult showman to the Nazis using their false purity as a means to capture the minds of the Germans). Despite the film’s inability to be totally convincing, nevertheless, its lovable doomed heroic figure, who is without a trick up his sleeve and is all goodness, becomes Herzog’s arresting motif. Ahola’s natural performance without guile works wonderfully well when contrasted with Roth’s controlled portrayal of evil. Check out István Szabó’s studied telling of “Hanussen” (1988) and see if you don’t appreciate Herzog’s more daring method of filmmaking all the more. Invincible signals Herzog’s magical return to making fictional films that are not all that simple as they appear. Long after seeing Invincible, its haunting themes and strange images still resonate. Herzog remains undaunted as the showman who might be losing a trick or two after four decades on the job, but he proves he can still hunt down an unseen truth and captivate an audience. This surreptitiously challenging tale of a Jew who is stronger than any member of the master race, is the type of personal film only the great ones attempt. 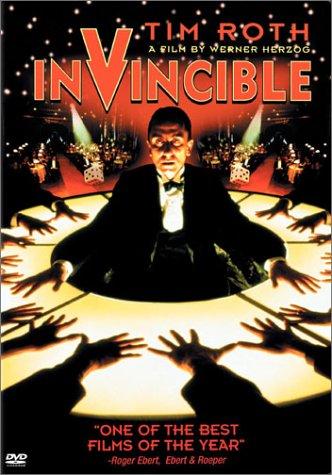