“The Coens just couldn’t nail this one down.”

This latest Coen brothers romantic/comedy about lawyers goes decidedly commercial and overboard on glam, maybe due in large part to the involvement of their middlebrow producer Brian Grazer (“Parenthood”/”The Nutty Professor”/”Liar Liar”). He produced the very ordinary crowd-pleaser Oscar winner — A Beautiful Mind, where he altered the biographical truth for the sake of the so-called higher business truth that schmaltz sells. If Grazer’s not the culprit for what went wrong, then it just might be the Coens themselves reaching out for a bigger share of the box office by slightly altering their style to bring in the masses. They wouldn’t be the first filmmakers to ever sellout, though there’s always the possibility they just honestly failed to come up with a good script.

“Cruelty” is set in the posh Beverly Hills of swimming pools in almost every house and every character in a materialistic mindset, where divorce lawyers are reviled and revered in the same breath. What saves this anti-lawyer film from the stench of its sitcom feel and general apathy, is the Coens signature black humor injected into the story in small doses to stop the tedium. What keeps it from being completely saved is that it holds back on neutral instead of plunging forward and making this the over-the-edge zany 1940s screwball comedy ala Preston Sturges and Billy Wilder that it wanted to be. The Coens seem stuck trying to make the despicable characters they are dealing with into likable fun people, as that never happened. The film felt more bitter and dark than funny and enlightening (though this aim might not be necessary for their films if they are just funny).

The explanation for what went wrong might just be that the Coens took a mainstream script languishing in the vaults of Universal for around 8 years and were asked to rewrite it without directing, but when old pal George Clooney came aboard so did the brothers. They just added their strange brand of humor onto the main offering and I believe that’s why the script looks so conflicted. What disappoints most is that despite two hilarious trademark Coens’ routines that brought great laughter, that wasn’t enough to compensate for how tired and mainstream it all felt. Though having the chatty Baron Krauss von Espy on the witness stand at the divorce proceedings was a real hoot, and a goofy Runyanesque hit man, Wheezy Joe, with asthma and in need of constantly using an aspirator, made for vintage Coens comedy. But too many of the comedy shticks felt forced and unfunny. Cedric the Entertainer as the private investigator with the divorce crowd trade is busy taking photos of cheaters without an ounce of tact, but his heavy-handed antics failed to prove funny. Billy Bob Thornton’s role as an eccentric marrying rich Texas oilman never struck oil. Geoffrey Rush had an underwritten part of an unimportant daytime TV producer who loses everything in his divorce, despite catching his wife in the act and getting a Polaroid. There wasn’t much that was funny about how that scenario played out. Also, by the time the film tries to predictably rehabilitate its greedy and unfeeling beautiful people leads who are always in conflict, George Clooney and Catherine Zeta-Jones, too much damage had been done to make the happy ending seem anything but tacked on.

One of the best divorce lawyers in Los Angeles is smoothy Miles Massey (George Clooney), who thinks he’s even smoother since he just got his teeth whitened to perfection. The hot-shot lawyer, who is all polish and slickness, is shown at the top of his game getting impossibly good results for his clients by using unscrupulous tactics to win at any cost and hooting it up at how clever he is for his loyal nerdy assistant Wrigley (Adelstein). Massey feels proud of himself that he cleaned out the TV producer and made his wife who was screwing the pool man a very wealthy woman. Next he goes up against a very beautiful woman named Marylin Rexroth, who got from her PI (Cedric the Entertainer) video proof that her real estate wealthy hubby Rex was in a motel with a hot number. Though attracted to Marylin, Massey still does her in by hiring her same PI to illegally break into her place and photostat her address book. From there he’s able to get Baron Krauss von Espy to testify she was a gold digger who once told him to introduce her to a silly rich man she will have no trouble divorcing and grabbing his fortune. The court rules against Marylin and she is left broke but vows to get even with the fancy shyster, who has fallen in love with her curvaceous bod and her puckered red lips and exposed eye-popping cleavage and silky smile. In other words, he has fallen in love with a woman whose credo is to use the power she has over men to take them for a sucker’s ride.

The silky lawyer is also recognized for his Massey no-loophole pre-nup agreement, which is a safeguard advised for his wealthy clients when getting into a marriage that might be risky. This is worked into the plot line as Marylin marries her oil tycoon and divorces him, which leaves her open to marry the ready-to-now-believe-love-really-exists Massey. The lawyer has become bored and unsatisfied with his success, and is looking now for something heartfelt. Massey’s role model whom he never before questioned is an 87-year-old senior partner of his law firm (Aldredge), considered the top-dog in the world of divorce lawyers, now a sick man but who still comes to work every day because sadly there’s nothing else in his empty life. Massey does not want to end up like his mentor, so he becomes vulnerable for the first time as love pangs strike. The funniest scene about Massey’s love conversion was at a Las Vegas divorce lawyer’s convention at Caesars Palace and the noted cold-hearted divorce lawyer is the keynote speaker giving a talk advocating the beauty of love to his equally ruthless colleagues and he almost has tears in his eyes when speaking about what love means to him.

There were lots of Coen brother things in the script to kvell about, but there were more things that went wrong than right. The jokes never developed as magnificently as they should have and the screwball comedy never took off from all its restraints. The challenge for the Brothers to grow and change their movie formulas is not to be questioned, but I just don’t think this challenge to make a star-driven mainstream film worked out satisfactorily. The Coens just couldn’t nail this one down, not because the acting wasn’t sparkling but because the barely tolerable script couldn’t find a way out of the dark hole it dug for itself despite all its cleverness. 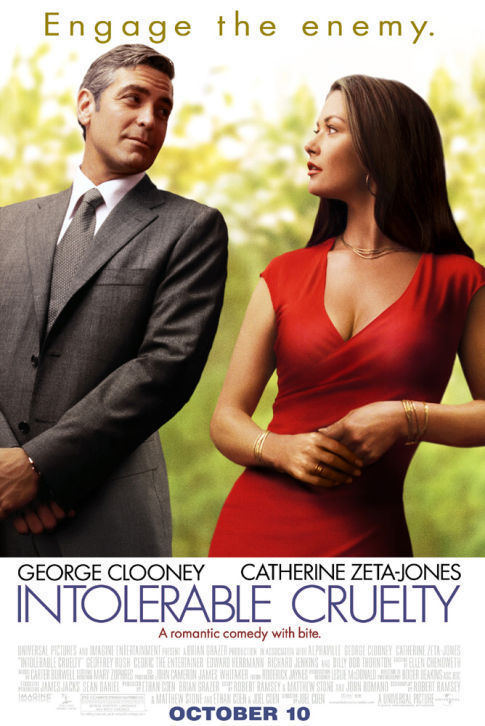