This lighthearted thriller, with a twist at the climax, is the twelfth in the Basil Rathbone/Nigel Bruce Sherlock Holmes series, with only two more to go. Veteran director of the series Roy William Neill (“The Black Room”/”Black Angel”/”Frankenstein Meets the Wolf Man”) does the best that he can with this weak story. It’s adapted by Leonard Lee from from the story “The Return of Sherlock Holmes” by Arthur Conan Doyle. It’s noted primarily for the film where Bruce makes his singing debut with a hearty rendition of ‘Loch Lomond.’

It opens with Sherlock Holmes (Basil Rathbone) and Dr. Watson (Nigel Bruce) walking at night the foggy streets of London and making plans for their much anticipated fishing vacation to Scotland. They also chat about the theft of the Duchess of Brookdale’s invaluable emerald collection, which made headline news. While chatting, several clues lead them to a house where they meet with the Prime Minister of the fictional country of Rovinia. They’re told that the recent car death of their King Stephan was really murder by insurgents and not an accident as reported. Stephan’s son, Prince Nikolas, who has been educated in Britain since childhood is in danger. He must now return to Rovinia to become the country’s king. Holmes accepts the Prime Minister’s plea for the famous detectives to escort the vulnerable Nikolas to Algiers on the S.S. Friesland, where he can be safely taken to Rovinia. Holmes and Watson must be on the alert for assassins, who have already showed their hand by shooting down a plane they thought Holmes was on with the young monarch.

Though the plot-line was stale and this is one of the poorer ones in the series, the Rathbone-Bruce team are always good enough to make things entertaining. 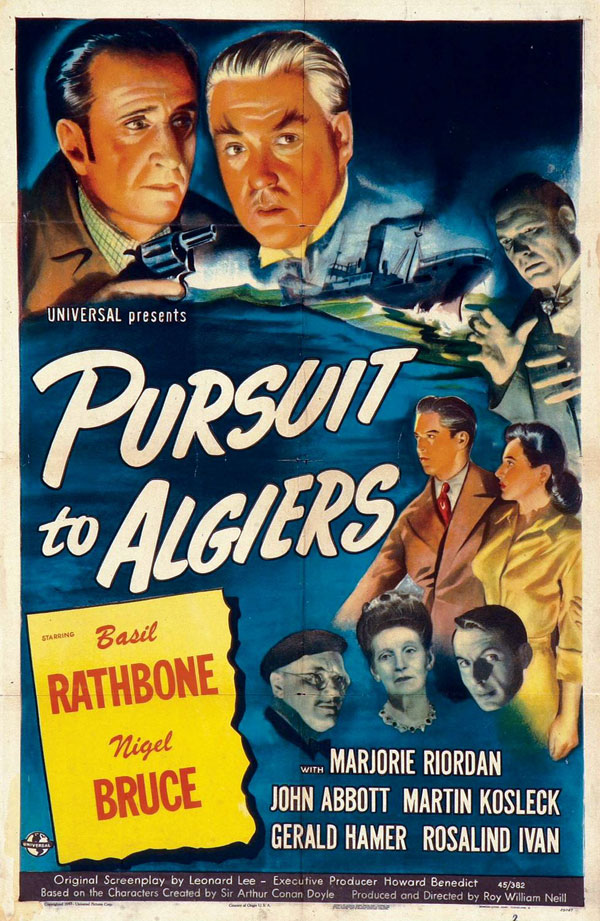