A disturbing drama, inspired by a true story, that rails against the hypocritical sexual attitudes of the times. It takes place in 1954, in a small English coastal town. The first-time filmmaker, Philip Goodhew, takes us behind the nice lace curtains of a respectable British household and brings us a story of repression, jealousy, and obsession. It’s a well-made but grimly unmoving film, that dwells on an unpleasant subject, that culminates in a gruesome double homicide.

Harold Guppy (Rupert Graves) is a handsome but disturbed lad, whom his mother gave up on when he was a lad. He has some psychological maladies due to an imbalance in his system and was told by a Navy shrink if he ate huge quantities of sugar it would calm him. He spent his childhood in reform schools in Australia and spent some time in the Merchant Marines. He returns to his hometown to strike up a relationship with his brother Morris (Les Dennis), who doesn’t recognize him when they first meet. It turns out that Morris only saw his younger brother a few times in his life, and considers him to be a stranger.

Harold is not made welcome in his brother’s house as his brother’s frigid wife, Iris (Elizabeth McKechnie), is leery of Harold and considers him as merely an intruder. But Harold answers a newspaper ad and finds a room in an age 50-ish grandmother’s house, Marjorie Beasley (Julie Walters). She’s married to Stanley (Matthew Walker), who is a good provider despite having lost a leg during WW 1. But ever since he lost his leg, she only respects him as a breadwinner but otherwise finds him to be a reprehensible drunk. Also at home there’s a bright but troubled 13-year-old daughter Joyce (Laura Sadler), who likes to fill her head with little facts and spouts them out to shock whomever she’s talking to.

Upon taking the room the bossy landlady, prone to wearing thick eyeglasses, having her short hair in a curled bouffant, clad in frumpy dresses, and supplementing her income by working as a laundress, tells Harold: “My husband and I keep separate rooms for medical purposes, and I sleep with Joy.” On the school evening of Joy’s 14th birthday party, the landlady who insists her lodger call her Mum, sneaks into his bedroom and slips under the bed covers of the reluctant lodger, and won’t leave until Harold capitulates and says yes to sex. If this isn’t complicated enough, Joy enters the room and hops into bed, saying she’ll tell her dad if she can’t stay. In this rather peculiar ménage à trois, Harold is not only stuck with Mum but has to ward off Joyce. They threaten to either tell the police on him, or tell Stanley. On the first night of this upcoming sexual affair Joy pretends to sleep, as Mum can’t resist having another go at it with Harold even though her daughter is in the same bed. During the course of the story, Harold has quite a time keeping Joy an aggressive virgin and the insatiable Marjorie from devouring him.

Seeking advice from his cold-hearted brother and frigid sister-in-law, he’s advised to get away from that house and join the Army. When he does he meets a girl named Jean (Annie Keller), whom he wants to marry. But Marjorie blackmails him into returning and buys his way out of the Army.

There’s plenty of black humor: the weak-willed Harold gets a tattoo with Mum written on it; the landlady lectures a fired laundress, who got pregnant, on her immoral behavior; and, birthday girl Joyce can exclaim upon being asked to go back to her room alone when seeing Harold and her mother in bed: “It’s not fair. It’s my birthday!”

By the climax, it becomes apparent that this affair is no laughing matter. The pathetic Harold is a real sickie, who gets sentenced to life for going berserk and killing the two women tormentors. But the film somehow couldn’t get past its laughter at these absurd characters and it failed to provide some pathos to go with the dramatics. There was just a growing emptiness that seemed to hang over its denouement, which prevented me from seeing this as just another bizarre crime story of the day film. 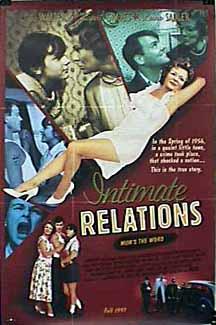