IN THE COMPANY OF MEN

This powerhouse of a film is geared to get under your skin and is not, as most Hollywood films are, made to amuse you and cater to your idea of what a dramatic film is supposed to be like. LaBute’s debut film is hard to describe though the plot is simple enough, but this is not a film that depends on plot.

LaBute looks at men through the eyes of successful thirty-ish corporate types and penetrates their real feelings about women, themselves, and their relationships. He gets us to listen in on what they are trying to communicate privately to each other. This is accomplished in the sterile, power driven high tech workplace, where the men who work there make their own rules about what works and roam the sleek corridors of their modern glass offices and hold manly conversations in the immaculately clean bathrooms they feel very comfortable in (a substitute for the proverbial locker room). What comes out of these conversations, to say the least, is disdainful; but, that is not the point LaBute is trying to make, nor does he use these talks solely for shock value. What is taking place is more real than that, and much more frightening. We witness what it takes to be in their company, and we want to puke. We want to say these are freaks or they are not the people we come into daily contact with, or that this is exaggerated; but, what is true to a certain extent, is that these are the regular guys we ordinarily come into contact with. These are the guys cranking out this booming economy, buying condos, living luxurious lifestyles, not worried about the world’s problems and the unfortunate. They are the movers and shakers of the business world, some of the ones who are the country’s future and present leaders.

Playwright LaBute uses words that are meant to be spiteful and piercing. The tough business guys understand this and can ‘talk the talk,’ and fight for their place on the corporate ladder with seemingly effortless grace as they constantly watch their backs.

The scene with the black intern (Jason Dixie) is bound to rub some people the wrong way, as it takes us into the strident relationships these business warriors have and adds the racial issue as another dimension to the film’s political incorrect stance. The black intern learns how it feels to be humiliated by his boss, Aaron; and, at the end of the lecture he receives, he is reduced to a flunky, getting coffee for the boss, that is after he is told to take down his pants so that Aaron can see if he has balls. Supposedly, he goes along with this arrangement to get into the club, as a secret deal is struck between him and Aaron that will benefit both. We can now be reassured that “the old boy” network will be passed on, even between the races, as the intern is initiated into the business world community.

Aaron along with his college friend, Matt, who is chosen to be the temporary supervisor of the project they are assigned to by their company, are on a six-week business assignment to this city that LaBute chooses not to name.

We are struck by the different personalities of the two–Matt is insecure and geeky while Aaron is handsome and bold. But what they have in common, is what at first seems most important to them: they have struck out and have been rejected by women, and feel a bitterness to them. Aaron is very vocal about this and suggests to Matt that they do something about this that might appear strange to him at first but, when he thinks about it, he will realize that it will give him a way to restore some of his self-esteem by getting even with all females. This is, of course, absurd! But the point of the story is that their life is absurd, so why not get what you want no matter what you have to do to get it. At least, we have the feeling that Aaron understands this.

Aaron suggests they meet a woman who is a loser and they both date her without her knowing that they are doing this and they will treat her as nicely as they can and before they go back to their regular workplace, they will both dump her. Matt is at first put off by this but soon agrees when Aaron comes up with the perfect victim, a deaf typist (Stacy), who is not bad looking but because of her disability which causes her to talk in garbled tones; and, therefore, has lost her sense of self-esteem.

What unfolds is somewhat unconventional for movie lore (though not for the world of plays, from where the director draws his strength (ala Mamet), which has a much richer history of misogynistic characters being the ones you love to hate). What is here unpleasant, shameful and immoral, is played out to the hilt with all the traumas one could expect. I must respectfully say, this film has balls. No matter how politically incorrect and unbelievable the story might be, it still gets our attention and makes us react to it on a visceral level. I think that is because we have all questioned our relationships at one time or another and felt a certain vulnerability, and wonder about how that other person now feels: the one who did harm to us, how is he or she getting on. This film does that to us; it provokes us to look at things that are unpleasant in our lives.

We realize that Aaron wins because he is a charmer, but those not taken in by sharing his deceits would not be taken in by his charm. He is ruthless because he understands the nature of the business he is in and is willing to do what it takes to succeed. But we are not really comfortable with Aaron’s aggressiveness and our first reaction is to recoil from him in horror. But I wonder how many Aarons we have met in real-life and didn’t recoil from! As for Matt, his insecurities become in many ways too easy for us to identify with. At first, we might tend to be feeling a bit sorry for Matt; but, since his weakness does not prevent him from being sneakily cruel to others, we soon realize that he might even be worst than Aaron who, at least, is following his natural instincts. While the Matts of this world are the humorless types you might have had a morning coffee with and felt you were with someone you didn’t quite like but didn’t know why, as they seemed nice enough; but, you know instinctively that you can’t trust them.

Stacy is the only one in the film that we are supposed to feel for. She is the passive female who is capable of giving unconditional blind love. She is the trophy many an aggressive businessman has won for himself; that is, if they can somehow cover up her handicap (I see “her” as a replacement symbol for the dumb blonde type the boss marries or has an affair with, except in this case she is the beautiful deaf /nice girl).

The three stars are all excellent. Stacy’s role might seem to be the most difficult one to pull off because of her portrayal of deafness and vulnerability, and being “the female” in the film. She becomes a representative for all women. But she is resilient, and we are left with the impression that in the long run of things she will come through this embarrassing episode better than the two men. She is the only one who is capable of knowing what love is; that is, because she is the only one who could get a glimmer of what the truth is even after being deceived. One can surmise that Aaron is heading down a long slippery road of manipulations and false senses of security, and that Matt is falling apart because he can’t make up his mind about who he is or what he wants to be.

This picture penetrates the masculine soul that feeds on aggressiveness. The film is able to captivate us because its words have power. 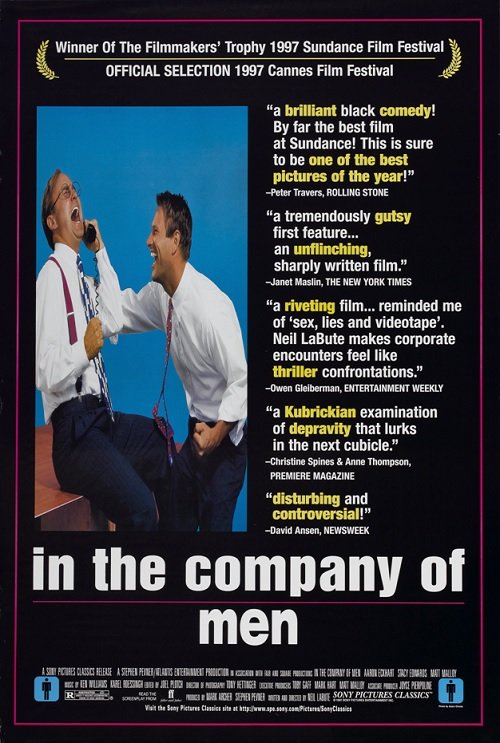