“Gives off dim vibes among critics and the public.”

Pop singer of ‘Girls Just Want to Have Fun’ fame, Cyndi Lauper, appears in her first film as an actress and doesn’t do that well. Ken Kwapis(“Noah”/”Sexual Life”/”A Walk In The Woods“) directs this schlocky comedy misadventure film, that gives off dim vibes among critics and the public. It’s based on a story by Lowell Ganz, Deborah Blum and Babaloo Mande. The silly dialogue is credited to these writers.

Sylvia Pickel (Cyndi Lauper), a ditsy beauty school student communicates with a spirit named Louise, and Nick Deezy (Jeff Goldblum), meet at a para-psychological research center. They are two hapless psychics hired by the opportunistic conman Harry Buscafusco (Peter Falk) to supposedly find his missing son in Ecuador, but in truth to find the legendary lost city of gold. Along the way they encounter a pyramid with magical powers, some shady psychics and gangsters.The film’s funniest thing it has going for it is the names of the co-stars. The co-stars were miscast and showed no chemistry to be lovers or comedians. It’s a bad film that is admired by a cult fan-base for all the wrong reasons. 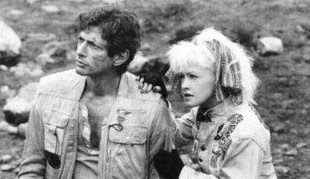