“Interrogation” was banned by the Polish government when completed in 1982. Poland was under martial law at the time. Director/writer Ryszard Bugajski managed to smuggle a copy of his film out of the country. It finally debuted at the 1990 Cannes Film Festival, picking up a well-deserved Best Actress Award for Krystyna Janda. Two things are certain about this powerful and worthwhile film: it is relentless in showing the psychological cruelty of a Polish female imprisoned by the secret police in 1951 and it’s not for everyone as it lacks entertainment value. But if you’re politically motivated and have the grit to sit through such a harrowing tale, then you will be rewarded with an intelligent work that suggests Orwell and Kafka. Though set in the 1950s the same political oppression resembles Jaruzelski’s Poland of the 1980s.

Tonia (Krystyna Janda) is a flighty cabaret singer who is married, but loves to party and get drunk. The film opens as the cute blonde walks off stage after singing a crowd-pleasing rowdy number and starts crying because she caught her husband paying attention to another woman in the audience. She refuses to go home and accepts an invitation of two admirers to join them for drinks (they are really members of the secret police). She gets plastered and they drop her off at a prison reserved for political prisoners. When she sobers up, she believes her arrest was a bureaucratic mistake. But the secret police hold her without charges and intimidate her with a hard line of questioning by a Gestapo-like Major (Gajos), who when not asking her about her sex life is ordering her to sign a deposition that falsely accuses her of crimes against the State. The Communist Major has contempt for her whorish ways and her lack of working class-consciousness. He threatens to keep her in prison forever or kill her if she doesn’t confess to her guilt and betray others. In the meantime, she’s either induced to cooperate when offered a hearty breakfast or punished for not cooperating by being sent to the bath–which means she gets hosed down until she passes out. Without charges filed and after many months passing into years without word from her friends and husband, she learns that her imprisonment was not a mistake–that someone betrayed her.

One of Tonia’s cellmates is a Communist sympathizer and an informer (Agnieszka Holland, the noted Polish film director) who rats her out about an affair she had with a major. But Tonia still refuses to crack and say lies against Major Olcha. She admits to sleeping with him after he arranged for her to perform at a military base, but claims she never committed any espionage or anti-government crimes as her questioners suggest. Tonia signed the deposition telling of all the men she ever slept with, and as another cruel gesture her tormentors show the deposition to her husband. He visits the cell only to tell her he’s been granted a divorce by the civil court and that he hates her. This leads to her suicide attempt and hospitalization, and in that setting to her pregnancy by a more sympathetic questioner. The only kindness she’s shown, is by the Major’s assistant Lieutenant Morawski (Adam Ferency). The Lieutenant takes over the questioning and becomes attracted to her and tries to make her prison life less torturous, as he’s the only one around who seems a little bit human.

What changes things to a certain degree is when Stalin dies and a new regime takes over. Tonia never loses her spirit nor confesses to these false charges despite all attempts to dehumanize and torture her. She is stripped, humiliated, beaten, starved and not allowed to be called by her name but only by the letter D of her last name.

What keeps up her spirits in the five years she spent in prison without being charged for any crime, is a willingness to die with dignity rather than betray herself to her jailers. Her philosophy of life can be explained by her belief that “In life you have to be illogical.”

The film was made at the time the Solidarity Movement was in full-swing and though things have changed recently in a democratic Poland, the suffering shown allows the viewer to bear witness to a regime that threw out any civil rights for its people and was allowed to do whatever it wanted. The results of such a tyranny is clearly stated and cannot be disputed, even if this might be a fictionalized story no one should doubt its validity. “Interrogation” is a thought-provoking film, and is essential viewing with a high historical importance. It takes sides with the individual’s rights over those of an oppressive totalitarian state, and at times is surprisingly nuanced to show the shifting power-plays between Tonia and her interrogators. 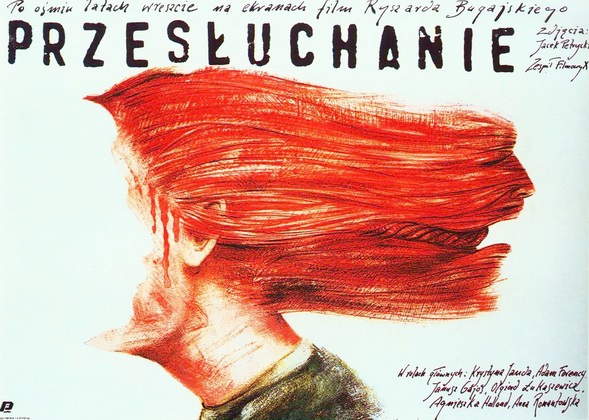