“A dull epic directed without inspiration by William Dieterle.”

A dull epic directed without inspiration by William Dieterle(“The Last Flight”/”Dr. Socrates”/”The Hunchback of Notre Dame”), that fails to sparkle despite a distinguished cast. The historical period costume drama, shot in black and white, moves along at a slow pace, is plodding and its well-researched facts about the 19th century French monarchy trickily established in Mexico doesn’t translate that well to the big screen. It was re-written by star Paul Muni’s brother-in-law to the dismay of co-writer John Huston, who claimed the edited version to make Muni the star, with more dialogue, of a film that was supposed to be about the French as exploiters and not about a Mexican liberator, was a disaster that ruined the film’s previously excellent script. The two protagonists, Juarez and Maximilian, never meet, and it appears as if two films were shot–first the story of Maximilian, followed by the re-written story of Juarez (with the added dialogue the now almost forgotten Muni insisted upon, who had the star clout at the time to command that change from Warner’s Brothers). It’s based on the play Juarez and Maximilian by Franz Werfeland the novelThe Phantom Crown by Bertita Harding.

Emperor Louis Napoleon III (Claude Rains) of France, towards the end of the American Civil War, in 1863, in order to colonize Mexico and subvert the growth of democracy and to circumvent the Monroe Doctrine, chooses to appoint the naive Austrian young Maximillian (Brian Aherne), the archduke of Hapsburgh, to be the emperor of Mexico, despite the Mexican republic’s recent election to president of an Indian native named Benito Juarez (Paul Muni). The idealistic new monarch never intended to be a puppet of Napoleon, and believed the plebiscite in Mexico to accept the monarchy was legit but finds no support when arriving in Mexico to rule and realizes Napoleon tricked him. Maximillian takes over rule from the patriotic President Juarez (Paul Muni) and tries to recruit him unsuccessfully to be his prime minister. But Juarez, not satisfied with the monarchy confiscating the land he returned to the peons and the over-all concept of a monarchy, chooses revolt over the intended benign monarchy and eventually causes the downfall of Maximillian and his loyal wife, the Empress Carlotta (Bette Davis).

When Napoleon wishes to avoid an American attack, after its Civil War ends, he withdraws French forces from Mexico. Meanwhile Carlotta suffers a nervous breakdown while in France arguing for the return of troops and support for her husband’s fair-play reform efforts. Upon the troop withdrawal Juarez defeats Maximillian, who is executed by the rebel firing squad.

In a small part John Garfield gives a good performance as the rebel general Diaz, despite his Bronx accent; while Gale Sondergaard is nice and snarky as Napoleon’s crafty wife. Muni’s performance is muted, while Rains and Aherne perform well but are vics of the stifling script.

It’s a pic that maybe could have been great if allowed to flourish as first written, instead it suffers from its stilted look and an insufferable Hollywood-like leftist political agenda. 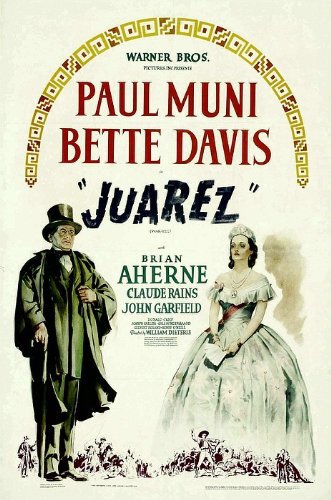