“This documentary offers a warm and humorous portrait of one of modern-days most innovative and compelling storytellers.“

On March 13, 1996, the noted Polish film maker, Krzysztof Kieslowski, died of heart failure in a Warsaw hospital at the age of 55. He had been retired since the completion of Red in 1994, but was contemplating a return to work on a new trilogy of films about heaven, hell, and limbo. He has made such memorable features as Camera Buff, Decalogue, The Double Life of Veronique, and the three colors trilogy (Blue, White, Red). Less than a year before his death, Kieslowski agreed to be the subject of an hour-long documentary by his long- time assistant, Krzysztof Wierzbicki. It featured Kieslowski’s recollections of his life and movies, along with several candid shots of the director relaxing and enjoying his retirement. K. offers insights into why he started out making documentaries. They gave him a chance to make films about “people who lead real lives.” The title comes from Kieslowski’s belief that people should not lie about how they’re feeling just for the sake of polite conversation. As a result, when someone asks him how he’s doing, he might say “I’m doing so-so.”

This documentary offers a warm and humorous portrait of one of modern-days most innovative and compelling storytellers. Kieslowski is an icon of Poland’s post-Solidarity cinema, who comes across as a gentle, modest, and intellectually curious man. Though the Danish film is as plain as vanilla, it offers a fascinating look into how the director thinks and his strong ethical views about film. It’s a must-see for fans of the highly acclaimed director. 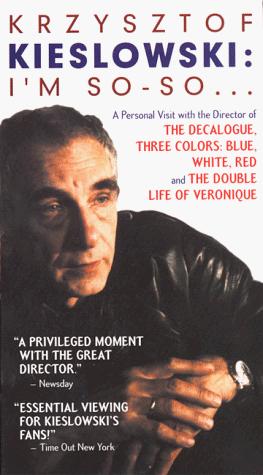