Invites comparisons to Ingmar Bergman. This is writer-director Woody Allen’s (“Hannah and Her Sisters”/ “Sleeper”/ “Manhattan”) first serious drama about a sophisticated but cold Long Island, New York, well-to-do family and their problems, with ‘interiors’ referring to the mind which is somehow related to the interior decorating of a house. The action revolves around the sisters learning how to relate to each other and their parents. Without Woody’s trademark comedy it’s somber and dull fare, and the punchless psycho-dramatics veer more toward soap opera than great art. Though it’s well-executed, the photography by Gordon Willis is very attractive looking and the acting by the talented ensemble cast is first-rate. The surprise being that Woody has such a serious side wanting to get out.

The successful married but suffering poetess, the eldest sister Renata (Diane Keaton), the attractive moderately successful but indecisive single TV actress, the middle sister Flyn (Kristin Griffith), and the sulking gifted book editor with an artistic disposition and a yearning to be an actress but no direction to realize her talent as either an artist or actress, the youngest sister and favorite of the father Joey (Mary Beth Hurt), are the three grown-up daughters who are shocked when their 63-year-old wealthy lawyer father, Arthur (E.G. Marshall), suddenly announces he wants a trial separation from his elegant interior decorator but depressive wife Eve (Geraldine Page). Arthur soon shows up after Eve’s suicide attempt and hospitalization in a sanitarium with a much younger and more lively but vulgar widow named Pearl (Maureen Stapleton) and the girlies rally around their abandoned, mentally troubled and overbearing mom, as dad announces his marriage plans. The problem is none of the girls can win their picky mom’s approval and her emotional instability only worsens as the girls argue among themselves how to treat her. With Renata being the falsely optimistic flatterer and Joey the downer realist.

Renata lives away from the others in Connecticut and is married to the failed novelist Frederick (Richard Jordan), who is a cliché of a hack writer adorned with a professorial beard, teaches in Barnard college, writes for high-brow literary ‘zines and is jealous of his wife’s superior ability. All these minuses leads the rejected writer to drink and go into long self-pitying harangues. Joey tensely lives with nice guy but touchy boyfriend political activist filmmaker Mike (Sam Waterston) and is angry that she’s the one burdened taking care of mom—someone she really hates but is afraid to let on to the others her true feelings. Meanwhile Flyn lives on the Left Coast and keeps her distance from the family.

After all the spewing and Waspish angst is let out of the bag, I don’t have a clue what it was trying to say other than there’s some dirty laundry in this very American family (nothing Swedish about them) that has to be washed, mom by not being nurturing left the bright girlies with some low self-esteem problems to deal with, and the adult young ladies must find their own way out of their hopeless states and it would probably help if they could bond together if they want to pull the dysfunctional family together. 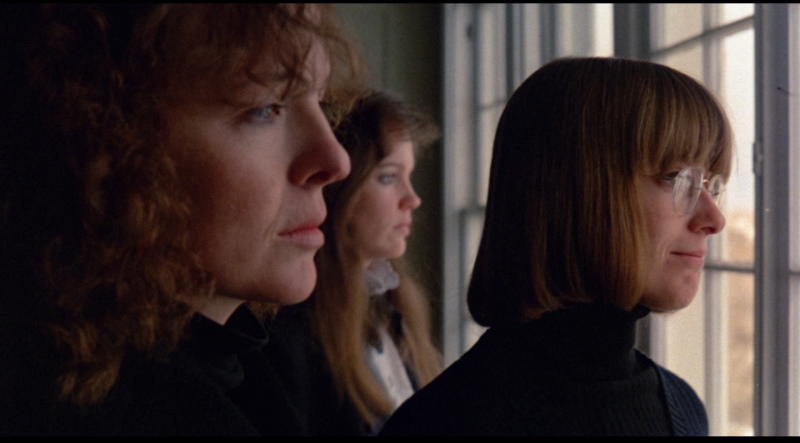