Michael Curtiz’s follow-up to Casablanca (there was a re-teaming of many of the same cast members, but the film lacked the same luster and spirit as its predecessor). It’s based on the novel Men Without A Country by James Norman Howe & Charles Nordhoff; it’s written by Casey Robinson and Jack Moffitt. James Wong Howe does his usual good job handling the photography for this black and white film. This stirring wartime drama is meant as an homage to the patriotic Frenchmen who fought the Nazis even after their country surrendered.

It opens in a mysterious spot in England’s countryside, as Brit war correspondent Manning (John Loder) is taken to the secret home base of a Free French air squadron that is hidden among the farm area and is led by Captain Freycinet (Claude Rains). There he’s told by Freycinet the off-the record story how the base got started and is asked to tell the story when the war ends. It involves the escape from Devil’s Island by five convicts who wish to fight for France in their time of need and were going by canoe to Panama to book passage back home but their boat hits a swell. They are rescued at sea by a French steamer, carrying valuable nickel ore, named the Ville de Nancy, whose orders are to return from the Panama Canal to Marseille since they learned the Nazis broke through the Maginot Line. The rescued convicts are Matrac (Humphrey Bogart), Renault (Philip Dorn), Marius (Peter Lorre), Petit (George Tobias) and Garou (Helmut Dantine). Through a series of flashbacks interspersed with the present war effort, we follow their story. Matrac’s tale is the most compelling and we learn that he was an influential French journalist known for his political activities in 1938 when he denounced Édouard Daladier as a sellout for signing the Munich Pact with Hitler. Matrac and his girl friend Paula (Michele Morgan) escape to the French countryside where they are married and have a son, but soon discover that he’s been framed of murdering a pressman during the attack on the newspaper. Matrac is convicted of murder and sentenced to life in Devil’s Island.

On the Ville de Nancy, the ship’s Captain Malo (Victor Francen) and French liaison officer, Captain Freycinet, are sympathetic to the convicts and wish to help them fight for France, but the pompous braggart Major Duval (Sydney Greenstreet), a pro-German sympathizer and supporter of Marshal Pétain, along with several other Pétain supporters aboard, seek to have the convicts arrested as soon as they reach Marseille. After the Vichy government cowardly yields to the Nazis, Duval decides to turn in the entire ship that planned behind his back to go to England rather than relinquish its valuable cargo. Mattrac leads his men to fight off Duval’s attempt and takes command of the ship, as he steers it to England and succeeds despite a German air attack that was encouraged when one of Duval’s supporters radioed the Germans.

It ends when Matrac’s plane, where he’s a gunner, is badly damaged returning from a bombing mission and he dies holding a letter to his son on his fifth birthday, which Freycinet later reads at his graveside as he pays tribute to the heroic patriot.

The script had too many unnecessary complexities and flashbacks within flashbacks to hold my interest throughout. Bogie is asked to do little but grit his teeth and look heroic, Morgan had the underwritten role of the loyal wife who waits at home and receives notes from hubby that say “Till we meet again,” Lorre had a small part that is easily forgotten, Greenstreet is flashy and memorable as the elegant fascist and Rains holds the film together as he tells the tale of the heroic convicts. The result is not a bad wartime flick, but is not in the same league as Casablanca. 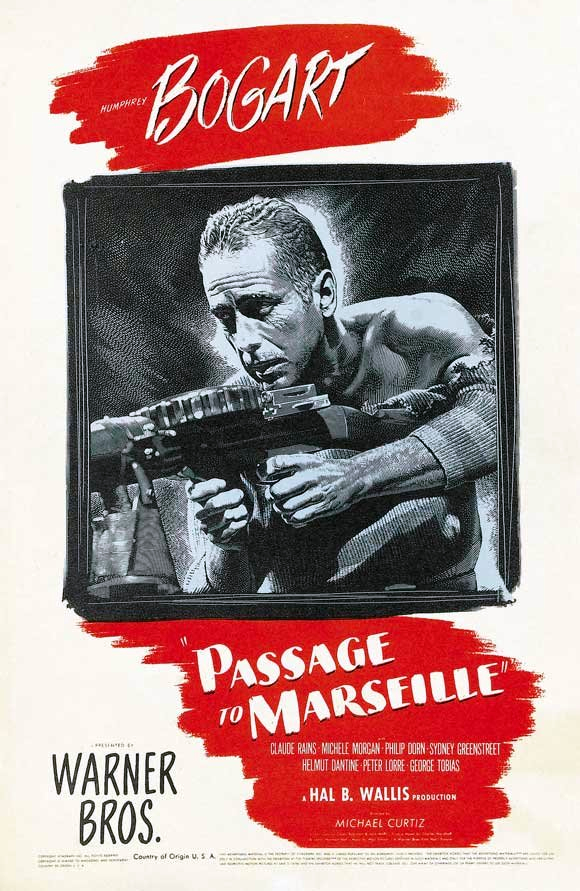