“The film sets a nightmarish tone.”

Strange is the norm for this exquisitely made first full-length live action feature from the American-born (they work in London) identical twins, Stephen and Timothy Quay, who have previously achieved cult-status for their animation films. This dream-like fantasy film, probably a fairy tale story gone amok, filmed in the style of German expressionism ala “The Cabinet of Dr. Caligari,” and most reflective of a Kafkaesque type of story depicting a man trapped by absurd circumstances and his mistrust of society. The film sets a nightmarish tone. It is loosely based on the novella ‘Jakob Von Gunten’ by the Swiss author Robert Walser.

The Institute Benjamenta is a boarding school for servants where the lessons are taught by the siblings, the eccentric despot Johannes Benjamenta (Gottfried John) and the fragile beauty, Lisa Benjamenta (Alice Krige). She teaches by being repetitive to the point of being ridiculous and surreal, as the course of study consists of repeating the lesson over and over; such as, the lesson in setting the dining table, where the would-be servants keep repeating in unison what their ethereal teacher tells them as she paces back and forth in front of the blackboard holding onto a pointer made of a deer foot. There are deer antlers that hang on the walls and pine cones and needles on the floors of the classroom. The use of deer parts must hold some symbolic meaning to the story, but I would only be guessing as to exactly what. The lessons take place in a dilapidated building, with a creepy looking and uninviting interior, setting the claustrophobic atmosphere the film thrives on. The ceilings in the student’s rooms are too low to stand up in (ala Dr. Caligari set designs).

The film follows its story through the eyes of Jakob von Gunten (Mark Rylance), who is first seen knocking on the school’s door and looking through the peephole at a monkey, as he is about to enroll. He states that he came to this place — which seems to be cut off in time and location from the rest of the world — looking for a chance to be of service to someone in this life. He will remain here until the school crumbles as it seems to be coming to a slow but sure end, as the school’s director announces no more students will be taken in after Jakob.

What does reality signify if everything can be turned upside down might be what the film is questioning, that is, if one were looking for a theme to this intriguing tale filmed in an evocative grainy black-and-white monochrome. Another theme might be the Jesus motif of how can one be like Christ, a humble servant, bringing the people the word of God. Jakob asks, “Is there anything Jesus could do for us in this world?” The answer seems to be, become our servant.

The film succeeds in being a uniquely hypnotic work of much visual merit, probably defying classification into a type of genre. There is hardly any dialogue and the sparse dialogue that is there, does not seem to be that pertinent to the story. The actors recite their lines as if they were puppets on a string being manipulated by the Quays. The sister asks, at one point, “Am I living in a fairy tale?”

It’s a story of the high-and-the low in status, each accepting unconditionally their place in society. All the repressed students who willingly serve at their master’s discretion go through their eerie robotic movements, and the story has the look of a spellbinding fairy tale.

What is also shown is how twisted and sexually repressed the siblings are. He’s in need of Jakob as his confidante and slave, showing how fearful he is of life. She is caressing Jakob’s cheeks as if to comfort herself by stroking him in what could be interpreted as a tabu romantic gesture toward Jakob, indicating their separation is due to class differences.

Of the eight students Kraus (Daniel Smith) stands out as the one who is wholly accepting of the arrangement of servant and master, accepting without a peep of protest the school’s dehumanization policy.

The film runs its course with alternating moods of exhilaration and tedium but proves itself to be visually stimulating overall, with every scene showing the contrasts between the light and dark side of life. There was also the memorable weird scene in the beginning of the film, where a face appears distorted through a goldfish bowl.

At the film’s conclusion, Jakob questions what he has learned and if he has really become insignificant. He implies that instead of things remaining a mystery such as the face in the gold fish bowl, knowing about things can be attained by doing what is habitual.

What it all means is subject to one’s imagination (so much of the film is purposely left unclear). This unsettling film is diverting in an intellectual way. You can look at it as a visionary poem or as an allegory on life, either way the film is original and stimulating even if it is melancholy.

The film was stylishly scored by Polish composer Lech Jankowski. 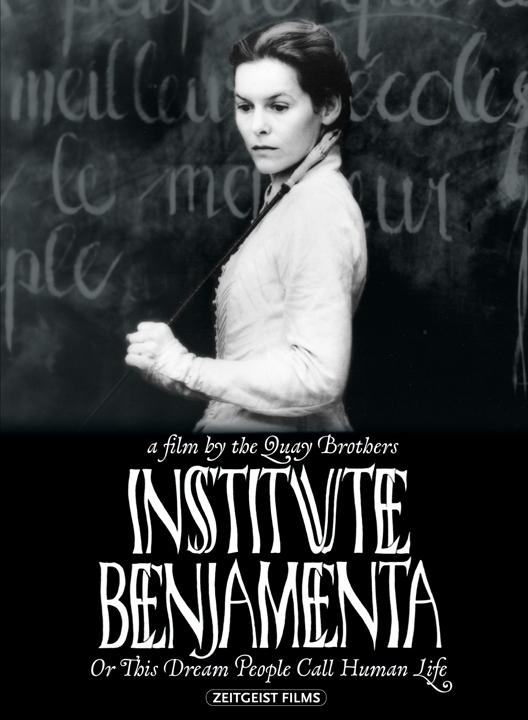