“All the Kafka basics are there for the literary types to muse over and it has great entertainment value in its unpretentious playfulness.”

Steven Soderbergh (“Sex, Lies and Videotape”/Ocean’s Eleven”/”Solaris”) directs from a Lem Dobbs story. It’s a gloomy art-film fiction set in Prague in 1919, about a fictionalized drab man named Kafka (Jeremy Irons) who for the last eight years and seven months slaves away at a dreary job as a diligent lowly clerk in the labyrinthine bureaucracy of the state-run Workers and Accident Association insurance company by day and, in his leisure time at night, writes novels. After being concerned with the disappearance of a colleague, Kafka is torn between an uncaring investigating policeman Grubach (Mueller-Stahl) and his attractive colleague (also the missing man’s girlfriend) who is an anarchist revolutionary, Gabriela (Russell), and whose intense radical group is responsible for planting bombs in the city. At work Kafka must put up with the irritatingly pathetic office spy, a petty tyrant named Burgel (Joel Grey), and his soulless boss, the chief of clerks (Alec Guinness), who in a benign way is encouraging him to be less sensitive and to conform and become less of a lone wolf.

It’s an intriguing Kafka filled with paranoia and missing bodies who turn up dead, and are termed by the police as suicides; it’s shot superbly by Walt Lloyd in a shadowy b/w (except for one tinted color sequence) and it’s styled in the Fritz Lang German expressionist mode. It comically brings into play Kafka novels such as “The Trial,” “Metamorphosis” and “The Castle,” and various things about Kafka’s personal life. Some might find it slow going, but the Kafka trip is enriched as it goes through a sinister ‘old world” Prague and the hero’s mind-blowing involvement with a group of radicals drawing him into dangerous intrigues. When Kafka becomes an amateur sleuth investigating the disappearance of his two colleagues: he talks with gravestone carver Bizzlebek (Jeroen Krabbe); follows the clues to a menacing tower called the Castle, that casts its shadow over the city and houses files on everyone; and he winds his way through the cellars and elaborate tunnels of the Castle, where he encounters the arch villain in the piece named Dr. Murnau (Ian Holm).

Its main problem is that it moves closer to being more like a modern horror story than Kafka’s opaque writings. But all the Kafka basics are there for the literary types to muse over and it has great entertainment value in its unpretentious playfulness; especially for those viewers whose logic dictates that they could never trust the authorities if only because they are the authorities. 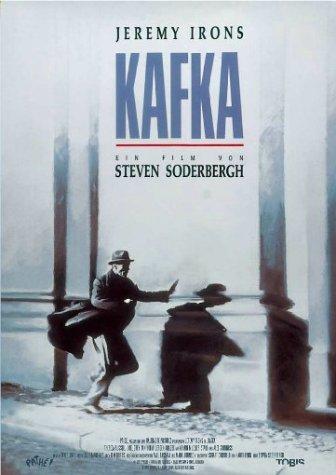