“It has no surprises up its sleeve to keep us tuned in.”

Filmed during the days of the pre-Production Code, allowing this daring risqué melodrama to be made without censorship. The problem is that it has aged badly and when viewed today seems arch. If it weren’t for the fine performance by the twenty-four year old Barbara Stanwyck in her first starring role, this would be a real snoozer. Archie Mayo (“Gambling Lady”/”The Petrified Forest”/”Four Sons”) does a poor job keeping this morality tale alive, as it’s way too chatty, the characters remain undeveloped cliches and it has no surprises up its sleeve to keep us tuned in. It’s based on the unproduced play by Edith Fitzgerald and Robert Riskin, and is written by Harvey Thew.

Wealthy young socialite businessman Richard ‘Dick’ Ives (James Rennie, noted stage actor) lives in sin with liberated free-thinker Anne Vincent (Barbara Stanwyck). He wants to marry her and raise a family, she’s in love with him but feels marriage will ruin their love like it has for their friends. Rennie’s stuffy father (Claude Gillingwater) is dismayed that the couple flaunt the laws of their society by living together on week-ends, and puts the pressure on them to marry. After months of such pressure, Anne gives in and accepts Dick’s proposal.

After a few years go by, Anne wants a more exciting life and hangs out with her eccentric fun-loving friends, the intemperate George Evans (Charles Butterworth) and the playful Helen Childers (Joan Blondell). To complicate things further, Anne’s old flame Price Baines (Ricardo Cortez) hangs around and makes a play for her. The marriage goes on hold, as Anne bargains for a trial separation. In the meantime, Dick returns to his beautiful old girl friend Marjorie True (Natalie Moorhead).

In this trivial and tedious weepie that lacks much punch and action, after both parties in the separation seek solace in others they have a reawakening after much soul searching and reunite for a happy ending. Thereby they reinforce the traditions of marriage over living a sexually free life and the film takes the sauce out of any arguments it offered to the contrary.

Two years later the studio made an exact remake called Ex-Lady, which starred Bette Davis. At least this dud had Stanwyck. 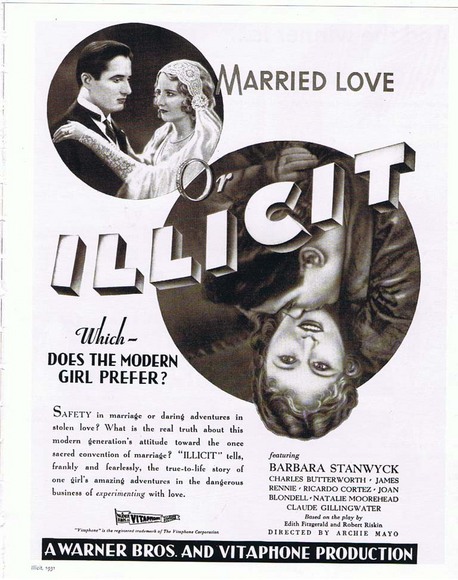