“This thin comedy is seductive despite not living up to its potential.”

In his directorial debut, Jeremy Leven (novelist and former therapist) presents an uneven airy romantic comedy. It playfully makes us take the bait that the Johnny Depp character is none other than Don Juan (the legendary 17th-century Spanish lover). In a most amusing opening monologue, Depp is in a full Don Juan costume including a cape, mask, and sword when he earnestly tells us that he’s the world’s greatest lover and at the age of 21 has made love to over 1,500 women. The vain Queens resident goes on to say that he intends to end his life because he was rejected by Dona Ana (Geraldine Pailhas), the only woman to ever reject him and the only woman he truly loves. After one last conquest the Depp character, who goes by the handle of Don Juan DeMarco, climbs atop a billboard and threatens to jump. Psychiatrist Jack Mickler (Marlon Brando) is called by the police department to rescue the delusional young man and after Jack talks Don Juan out of jumping, the disturbed young man is taken to Woodhaven State Hospital, an asylum in Queens, for a 10-day observational period.

The overweight and burnt-out Jack is retiring in ten days and is initially passed over on this assignment by his boss, Dr. Paul Showalter (Bob Dishy), but he soon replaces his flustered colleague (Stephen Singer) by convincing the boss that he can help this young man better than any other staff member. Jack has ten days to decide whether to commit him to a mental hospital or release him. The only thing the boss insists on is that the Don Juan character is “put on meds,” an order Jack resists believing the kid is harmless and won’t ever be able to find himself if drugged.

Don Juan is a lovable loony who has all the female nurses at the hospital swooning over him. In their psychiatry sessions he regales Jack with fantastic tales of his life. He begins by telling of the first time he made love. It’s in Mexico with an older married woman (Talisa Soto) when he was 16 and she was his tutor. The affair was discovered by her husband, who in order to save face said he was having an affair with Don Juan’s mother. This led Don Juan’s Italian father Antonio (Franc Luz) to die in a duel with the cuckolded husband to protect his honor. To avenge his father’s death, Don Juan kills his father’s slayer. After that incident Don Juan’s Mexican mother joined a convent. His mother then sends Don Juan by ship to Spain, but the crew sold him into slavery and he somehow wound up disguised as a woman in the Arabian harem of a sultan. After his release from the sultan’s palace, Don Juan is back in Queens and tells Jack in detail what led to his suicide attempt. Mickler is so taken aback by the kid’s intensity over his romantic visions that the excitement rubs off on him in his personal life and he tries to rejuvenate the sex in his marriage. There’s an hilarious bedroom scene with his comforting longtime wife (Faye Dunaway), who glows in the dark when hubby gets sexual again.

The film turns semi-serious as Jack must decide if these tales of Don Juan’s match the few facts he’s uncovered. The young man’s grandmother (Teresa Hughes) mentions that his dad was known as ‘The dance king of Astoria’ and that the kid’s father, employed as a dry cleaner, married a Queens girl and eventually moved to Phoenix. The kid’s father became disillusioned with his unfaithful wife after moving to Arizona, and died five years ago in a Phoenix traffic accident. As a result, the young man’s guilt-ridden mother joined a convent. The grandmother said she didn’t see her grandson after the age of six and saw him next when he suddenly showed up at her doorstep three months ago. On the wall of the kid’s bedroom are centerfolds from a girlie magazine featuring the nude lady he fell in love with, who when he called she cruelly rejected him with the slur that he was a creep.

The direction is often unimaginative, the film’s pace seems a bit off, and the camera work is not visually inspiring, but this thin comedy is seductive despite not living up to its potential. It seems to trade laughs for a more sobering ‘point of view’ narrative, as everything is kept subdued and decidedly realistic showing how debatable is the treatment of mental patients. There should have been more laughs, but the story was made so believable that I began to relish it for its sound humanistic viewpoint and found it acceptable as an endearing modern parable. But the film’s greatest asset was the spirited performance by Brando and Depp’s quirky and sensitive one. Both actors brought their characters to life in a rich and irresistible manner, even though Brando wasn’t asked to do much. 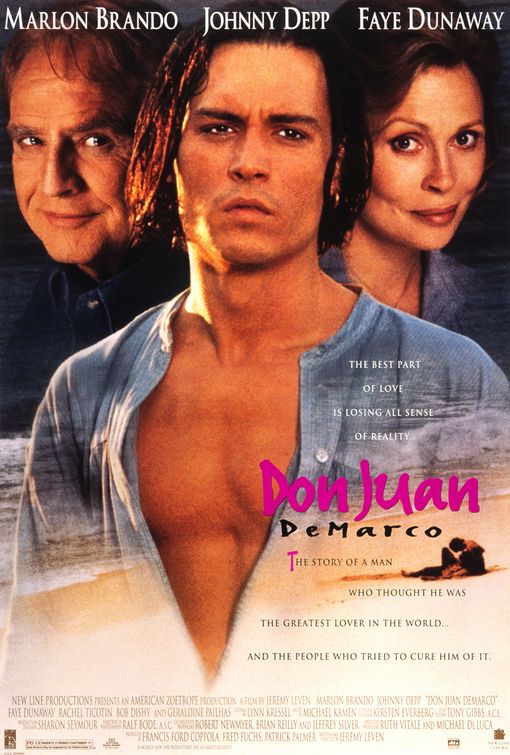