This is not an art movie, yet I saw it in an art-house theater. It is perfect for the mall, where American teenagers can shake hands with European teenagers in their need for mindless MTV films. “Run Lola Run” is about that old cliché of young lovers relentlessly on the run. If seen at your friendly mall you could, at least, be reassured that there is little chance of anyone trying to sneak it in as an art film.

RLR should make it apparent that other countries can make obnoxious films with banal and predictable characters just as readily as Americans can. There is no substance in this fast-food German meal, served up at a kinetic speed. The film is as deep as reading a Daffy Duck comic book or playing a Road Runner video game or watching a Bugs Bunny cartoon; and, if that entertains you then, perhaps, I could recommend that you take a look at Run Lola Run. Just don’t tell me that it’s more of a film than that!

It has the audacity to have in its opening credits a quote from T.S. Elliot’s “Little Gidding”, about how the end in life is only the beginning. In all probability, the blue-blooded Elliott would not have cared for this film–and to quote him and then have a film that has nothing in the world to do with his poem or with the quote, except to show that even these crass filmmakers aspire to a higher art form.

The filmmaker also asks the complex questions: Who are Men? Where do they come from? What is their aim in life? These questions once asked, of course, are never even attempted to be answered. Though it would have been good comedic dialogue to have the two leads, Lola (Franka Potente) and Manni (Moritz Bleibtreu), try to resolve these deep philosophical questions.

What does take place is a soccer ball being kicked to open the action in the film as the movie is supposed to be like a game, with the director making up the rules as he goes along.

The slight plot involves Lola’s boyfriend for the past year Manni, who will be killed if he can’t come up with $100,000 marks which he got from a drug deal–but he lost the moneybag on the train to a bum. He blames this on Lola for not meeting him on her moped as planned (her moped was stolen). As Manni frantically speaks to her on the phone, telling her she must now meet him across town in 20-minutes, at high noon, or else the boss who setup the deal is going to kill him (now wouldn’t that be a shame!). The only other thing to note is that Lola is a punk rocker, with the raggedy-Ann hairstyle of blazing reddish/orange dyed hair and plenty of tattoos on her body. Manni, not to be outdone by her, sports a few nifty tattoos himself, while also taking on the punk look.

The fun, if you are going to have any, comes in following the athletic Lola as she makes a run for it through spots that she will revisit three different times each for 20-minutes and with three different versions, before the film is over, as any one of the versions could be true or none of them could be true, it just doesn’t matter. Nothing matters, here. This is a disposable film, like junk food. The fun is in watching Lola run and the cartoonlike character she has become, and in the reactions she gets from those whom she meets while running.

After Manni tells her hysterically on the phone his only chance to stay alive is to holdup a nearby supermarket, she flings the red phone in the air and bolts out of her mother’s apartment as a cartoon of her flashes on the TV screen and she rushes past her mom who is on the other phone; and, the next we see of her she is running live on the street. A few of her same markers will be: a visit to her father’s bank,an encounter with an ambulance, men crossing the street with a pane of glass (boy, what Harold Lloyd could have done with that material!), the bum she keeps running into, and a lady in the street whom she keeps banging into. The clock is rewound for each version as she starts over again in her mother’s apartment, going through the same routine, but with different impressions and results.

Needless to say, anything goes here; this film does not try to make sense and it doesn’t. It’s on the low end of the comedy totem pole though the old silent comedians, such as Charlie Chaplin and Buster Keaton, did bits similar to this; but, they had a logic to their madcap humor and knew how to tell a story to make their comedy work. The other thing this film tried unsuccessfully to do, was show how chance could change one’s life and make things turn out differently. There are so many films that tried this theme, some were a success like Rashomon (1950), some modestly successful like Blind Chance (1982), others had less success like Sliding Doors (1998), but none were as weakly done as this one.

At least this subtitled, low-budget film flew by quickly and leaves you no worse for wear.

To mimic one of the few attempts at dialogue, when Lola and Manni try to form some sort of communication with each other to see if their love is for real and she asks him: “How does he know that he loves her?” and he replies, “I just know.” Well, I just know I didn’t like this film. 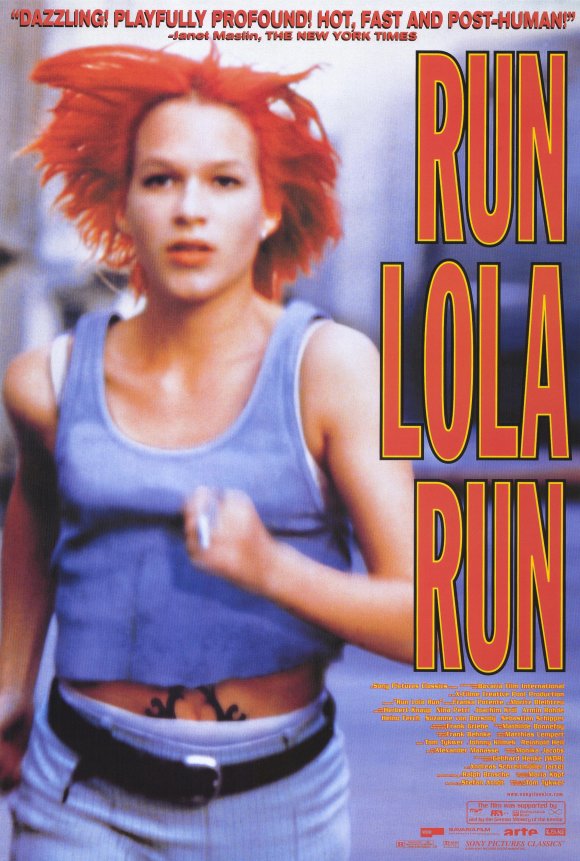