The second remake of the 1932 The Mouthpiece and the 1940 The Man Who Talked Too Much, that was based on the play by Frank J. Collin. W.R. Burnett (screenwriter of the similar themed film noir “The Asphalt Jungle”) turns in a snappy screenplay. Director Lewis Allen (“A Bullet For Joey”/”Whirlpool”/”Suddenly”) keeps the Warner Bros. B-film melodrama hopping and gets a vigorous performance from Edward G. Robinson, who couldn’t get A – film parts in the 1950s because HUAC went after the popular actor and art connoisseur for his liberal beliefs.

When hard-nosed honest District Attorney Victor Scott (Edward G. Robinson), who never lost a case, convicts an innocent man (DeForest Kelley) who is sent to the electric chair, he becomes disillusioned and quits after stating that he would “rather see 100 guilty men go free than convict one innocent man.” After becoming a drunk, Victor starts a practice as a criminal lawyer. Throwing away his old scruples, he now defends anyone who has the cash and defends them by any means possible within the law (like swallowing poison in court and then getting his stomach pumped), and he quickly builds a rep as an effective mouthpiece for even the low-level criminal. Big-time racketeer Frank Garland (Albert Dekker) puts him on his payroll, after being convinced by Victor’s unorthodox flashy courtroom shenanigans.

The honest new DA (Edward Platt) can’t get a conviction on the racketeers because there’s a leak from someone in his office. When former assistant Ellen Miles (Nina Foch) visits her boss and lifetime friend Victor, the DA had her followed and suspects she’s the leaker. When Ellen learns it’s her shifty husband (Hugh Marlowe), also an assistant in the DA’s office, she kills him in self-defense. It’s up to Victor to straighten things out, and he dramatically does so in the courtroom, despite threats from the gangster Garland. Victor wins the case with the help of the testimony from the busty bimbo piano player/singer Jayne Mansfield, who turns the tables on her ruthless racketeer boss and boyfriend. As a result, Ellen is free and Victor makes a noble self-sacrifice to get her justice.

The Robinson character is loosely based on Bill “The Great Mouthpiece” Fallon, one of the ace criminal defense attorneys of the 1920s, who successfully defended gambler Arnold Rothstein in the “Black Sox” fix scandal of the 1919 World Series. 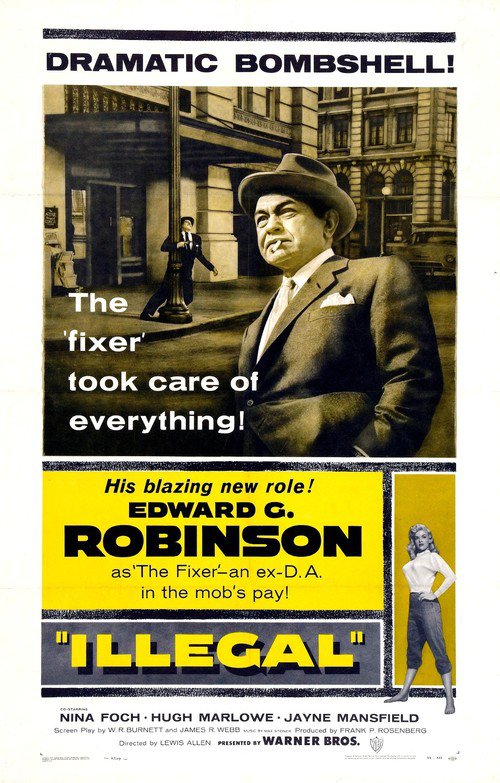 FALCON IN HOLLYWOOD, THE