“Succeeds because it never takes itself that serious despite its heady premise.”

David O. Russell’s (“Spanking the Monkey”/”Flirting With Disaster”/”Three Kings”) post-9/11 New Age whimsical, iconoclastic, philosophical, screwball comedy ala Preston Sturges and with strong suggestions of a Charlie Kaufman film, is a lighthearted visual comedy treat (lots of lowbrow slapstick) that succeeds because it never takes itself that serious despite its heady premise. It offers us a talented star-packed cast, witty dialogue and a cerebral existential screenplay that hits the intellectual bizarre spots with enough frequency to keep chaos under control even if it dominates the plot to the point it keeps the meaning fuzzy (a good thing in this case, because the clearer the film becomes the less effective is the comedy and the more banal the philosophizing).

Russell substitutes three philosophers for his former three kings, and weaves a tale around an angry young long-haired and long-winded poet/environmental activist, Albert Markovski (Jason Schwartzman), organizer of Open Spaces, a group of liberals and do-gooders engaged in fighting a department store chain called Huckabees (much like Wal-Mart) that is building on a wetland site. Albert is talking to himself and is filled with insecurities that his liberal ideologies are not effective in dealing with the world’s problems, and uses a series of three coincidental meetings with a seven-foot-tall Sudanese guest in this country to come to the realization he needs help. This help is sought when Albert hires, pro bono, the eccentric existential detectives, Bernard and Vivian Jaffe (Dustin Hoffman & Lily Tomlin), a married couple, in order to find out what it all means. They immediately get to the root of his angst by questioning him about his life experiences (a sample question from Vivian: “Have you ever transcended space and time?” — Albert: “Uh, time, not space. Um … no, I don’t know what you’re talking about” ). The couple then tails along with Albert as he battles Huckabees and those in his group who have lost confidence in his ability to lead them. In the meantime, the detectives fill Albert’s head with theories that everything in the universe means something because it is interconnected and work to determine the meaning of his life.

Huckabees rising star sales executive Brad Stand (Jude Law), working with the store’s public relation department, is an insincere flatterer who has charmed his way through life and has used these social skills to take control of the advocacy group by co-opting Albert’s aims and allowing the group to think that the department store chain will help solve the environmental problem from within the corporate structure under his leadership–the shallow career climber’s ulterior motive is to ingratiate himself into the upper levels of the corporate hierarchy any way he can, as he plans to make sure the department store builds on the property. Others involved in this madcap plot include: another client of the Jaffe couple, Brad’s macho hero fireman ‘Other,’ Tommy Corn (Mark Wahlberg), who is an environmentalist petroleum-obsessed; a gloomy nihilist writer of a self-help book entitled “If Not Now”, Caterine Vauban (Isabelle Huppert), who believes “nothing matters”(the former student of the couple’s is now a rival acting as a temptress to lure away the detective’s clients by showing them how cruelty can work effectively in getting them what they desire); and, finally there’s Huckabees’ corporate spokes-model for their logo, Dawn Campbell (Naomi Watts), the pretty girlfriend of Brad, who has a reality attack and dons her model’s Amish bonnet as her everyday costume which causes turmoil among the corporate players and sours the superficial Brad’s love for her. All these characters suffer through an existential breakdown, as Russell leaves us with the belief “No manure, no magic.”

The film’s main problem was that all the characters are less like real human characters than symbols represented in the metaphorical scheme of things. Despite this fault, this innovative film was always funny and had a healthy sense of mischief that kept it lively and buoyant.

It’s interesting to note that Schwartzman’s real mother, Talia Shire, plays his mother in the film. 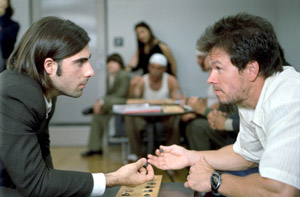