Charles Chaplin (“Shoulder Arms”/”A Day’s Pleasure”/”The Kid”) directs and is featured in dual roles as the familiar Tramp character and as a heavy-drinking wealthy man whose wife (Edna Purviance) is angered over being neglected in this very funny comedy short. When her husband doesn’t show up to meet her for the summer season at the Miami train depot as she asked him in her telegram, she moves out of their hotel room to another room. The Tramp also arrives by train in Miami, but he was traveling without a ticket in the undercarriage of the car Edna rode in on coach. That afternoon the Tramp causes problems at a golf course by hitting the other golfer’s balls and causing untold confusion on the links. After causing too much of a disturbance to remain at the golf course, the Tramp sits on a park bench to relax. But a pickpocket tries to steal the wallet of the gentleman sitting next to him, and the Tramp gets blamed and has to flee from the law. While on-the-run the Tramp stumbles into the costume ball given by Edna, dressed as Marie Antoinette, who has forgiven her husband and invited him to attend. Edna mistakes the Tramp for her husband and cuddles up to him, while her husband shows up in full knight’s armor but the visor on his helmet locks shut and he can’t be recognized. The father of Edna (Mack Swain), dressed in a kilt, introduces the Tramp to his swell friends as her husband but the Tramp denies that they are married and the embarrassed father goes berserk and starts beating Charlie up until the mixup eventually gets straightened out. While the Tramp is back at the park entrance, the father on the insistence of his daughter goes out to apologize. But the Tramp gets even by shaking hands with the swell and then while the father’s back is turned giving him a swift kick in the rear end and running away down the palm tree lined street. 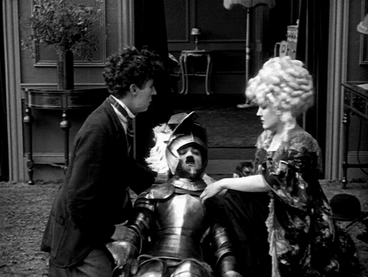