This is an early Kurosawa common man romantic/comedy feature with the filmmaker at his maudlin worst, doing a Frank Capra sentimental tear-jerker. Think of it as a stilted version of Mr. Smith and Mr. Deeds and not of Kurosawa’s free-flowing samurai epics. It’s a whimsical love story about a returning disillusioned soldier now a laborer, Yuzo (Isao Numasaki), down on his luck and short on cash, who is engaged to this spunky, nice girl Masako (Chieko Nakakita) whom he dates once a week on Sunday on his only day off. This was the first and only foray of Kurosawa into shomin-geki, the 1930s-40s Japanese drama of the common man. It’s a good thing. The filmmaker was to go on to bigger and better things after his 1951 Rashomon was to attain international acclaim.

The couple meet at the train station to start their date. They worry about money. Masako watches Yuzo play baseball with some children. They go to the zoo. They look at a house they cannot afford and dream about one day owning it; likewise for a coffee shop. He wants to have sex when he takes her back to his tight quarters, but she doesn’t. Upset she runs into the rain and breaks his heart, as he paces the floor of his bare apartment thinking she won’t return. When she does, they go to see Schubert’s “Unfinished Symphony.” But ticket scalpers buy up all the cheap seats and they can’t afford to go. The couple sit in the now empty outdoor stadium where Schubert was just performed and Yuzo pretends to conduct the symphony. Naturally, we hear the symphony. That was just too much corn for me.

The ironical title has a double meaning, as the day might not seem much but it shows that society has quickly changed from the recent past. The film ends with Yuzo catching the train home just after making plans for next week. It was made in the midst of the social and economic upheaval of the postwar period and shows the yearnings of the young generation to find peace in domesticity and to fulfill their materialist dreams. The upbeat girl acts to cheer up her defeated man, symbolic of the way the new Japanese society was trying to recover from the lost war. 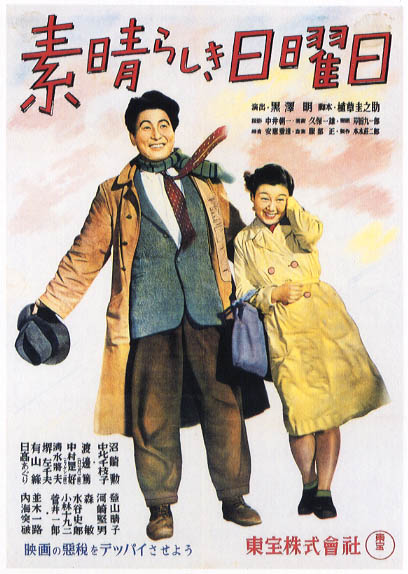 IN THE LAND OF THE HEAD HUNTERS

MAN WHO CHANGED HIS MIND, THE