“It played to audiences of shop women of that era who fantasize that their lives could suddenly become glamorous.”

This Modern Age is a romantic melodrama aimed at a female audience. It played to audiences of shop women of that era who fantasize that their lives could suddenly become glamorous. It’s directed by Nick Grinde from the story Girls Together by Mildred Cram. The screenwriters are John Meehan, Sylvia Thalberg, and Ms. Cram. It is shot in black and white, and its tame soap opera morality tale belies its title as something modern. The acting was high-strung on all fronts, with Joan Crawford offering a particularly high-handed performance.

The lower-class American Joan Crawford as Valentine Winters goes to Paris to live with her estranged socialite mother Diane Winters (Pauline Frederick, veteran of the silent films) after her father dies. She hasn’t seen mom for 14 years, and shows up coiffed in dyed blonde hair. The naive Crawford doesn’t at first realize her sophisticated mom is a kept woman by Parisian libertine André (Albert Conti). But when she does, she is only too eager to join his fast crowd of swingers. She takes up with the reckless Tony (Monroe Owsley), a young drunkard who lives for fast cars and parties that require tuxedos. While the two are out taking a spin in his car, the inebriated Tony accidentally flips the car over. To the rescue comes the knight in shining armor, Bob Blake (Neil Hamilton), a handsome former Harvard football star. After his good deed, Bob quickly falls in love with Val.

The good lad is eager to do the right thing and marry Crawford, so he brings his uptight, conservative, wealthy parents (Bosworth and Dunn) to meet Crawford’s mom. This proves disastrous, for a drunken Tony accompanied by his fellow drunks suddenly appear and stun Bob’s puritanical folks. Soon sugar daddy André arrives, and his relationship with Frederick is made crystal clear to Bob’s folks–that she’s been his mistress for the last seven years and that he pays the bills. The stern parents immediately insist that their son break up with Crawford.

This leads to a teary heart-to-heart between Crawford and mom, where each gets things off their chest that needed to be said. But Hamilton ignores his parents’ wishes and follows the flutters in his little heart and returns to Crawford’s side, just as she has given up hope about love and is returning to the fast crowd. The reunited pair run off together as a repentant Diane feels she has learned a lesson and reforms, dumping André. As far as I could determine, the situation was resolved when Diane agrees to be kept by Bob instead of André. The melodrama is an attempt to explore the modern age’s new morality and the ensuing social conflicts that arise. It can be enjoyed for many of the wrong reasons such as by its campy unintentional comedic moments and its hollow dialogue that caused more giggles than sober reflection. Though entertaining and not without some redeeming features, in her biography Joan Crawford told her fans to forget “This Modern Age.” I’d go along with that sound advice from the Pepsi gal. 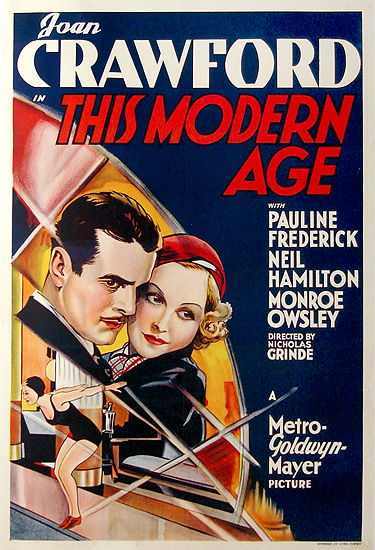