I COVER THE WAR

“It’s a B film that gets by with some good action sequences.”

Don goofs things up by showing his inexperience and allowing two gunrunners (Jack Mack & Franklyn Parker) to use the press pass Don stole from Bob to reach Muffadhi’s camp. Meanwhile Bob takes a romantic walk with Pamela. Because of Don’s rash act, Bob is suspect as a gunrunner. The action picks up when the gunrunners are killed by Muffadhi, and Bob and Elmer must escape confinement by Muffadhi to warn the Brits of an attack.

It’s based on a story by Bernard McConville. It’s a B film that gets by with some good action sequences. 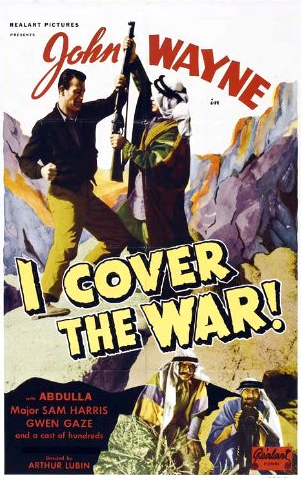