I CAPTURE THE CASTLE

“It didn’t excite me or hold my interest, though everything about it was modestly successful.”

I Capture the Castle is an enchanting Jane Austen-style adult (in the good meaning of that term) romance tale narrated and featuring Cassandra Mortmain (Romola Garai), a charming 17-year-old beginning writer (she keeps a diary) living in a rundown English castle her family rents with her younger brother Thomas (Sowerbutts), her 20-year-old curly redheaded sister Rose (Rose Byrne), and her bohemian parents — the despairing writer father James (Nighy) and the much younger arty stepmother Topaz (Fitzgerald).

British television director Tim Fywell tries his hand at films for the first time and has British television writer Heidi Thomas craft the script from the 1948 first novel by Britisher Dodie Smith, who was living in America at the time and was later to become known as a children’s writer. She’s especially remembered for her “101 Dalmatians.” What works rather well is the way it contrasted the lifestyles of rich and poor–there are two great dinner scenes, one at the castle and the other in the mansion of a brusque British widow. Though the complications in the romance tale had its endearing moments, it nevertheless packs too many twists for the excellent ensemble cast to save it completely from too much plot development.

The film opens when the father is at his happiest, having just written a masterpiece a few years before. For further inspiration to write more masterpieces, when on an outing, he talks the family into renting a picturesque stone castle that has no electricity and is dank. Following an argument with his wife where he attacked her in a moment of rage with a butter-knife and she had to be rescued by a neighbor, he was never able to write again for the next 12 years after spending four months in prison. Upon his return to castle life his wife soon dies and he later on marries a flighty artist’s model named Topaz, who saw herself as his muse and cure for his long writer’s block. She also tries to mother his ungracious daughters. Topaz is in the habit of dyeing everyone’s hand-me-down clothes green, which affects Rose the most because it adds to her displeasure of living in such poverty. The eccentric family had no money coming in and were only able to survive because for 2 years the landlord hasn’t pressed for the rent.

In the mid-1930s they receive an unexpected visit from two handsome American brothers, the contemplative, sensitive, scholarly goateed Simon Cotton (Henry Thomas), who has just inherited the Suffolk castle upon his father’s death and, his opposite, the homesick outspoken and brash Neil (Marc Blucas), who is an orange grower from California. The boys are at first not impressed with the castle as it reminds Simon of something in literature, while Neil disdainfully calls it “the House of Usher.” They are also not taken with the girls, as they find Rose to be too theatrical and forward, while Cassandra is too plain.

The heart of the story revolves around the sisters scheming to get Simon to marry gold digger Rose and save the family from poverty, as “Castle” plays games with the nature of love and brings up how strong the powers of love are and how deadly are its emotional repercussions. The beautiful Rose wins the heart of the sincere Simon and is willing to marry him even though she doesn’t love him. Cassandra secretly pines for Simon, but is convinced Simon loves Rose. Neil publicly detests Rose but secretly loves her. While handsome nice but poor boy Stephen, who is a neighbor of the castle and helps out with odd jobs, openly loves Cassandra even though she only thinks of him as a brother. If the young ones seem confused, the adults are more than confused. The father upon meeting the brother’s imperious mother, Mrs. Cotton (Sinéad Cusack), begins an affair, as he’s not put off when she dismisses him as a has-been artist whose well has run dry.

It was certainly a competent high-brow production, much like an intelligent British stage play, one that effectively allows the romantic fantasy to turn back for a reality check. But it didn’t excite me or hold my interest, though everything about it was modestly successful. Romola Garai in her first starring role gives a sympathetic performance as the one most thrown into a tizzy about coming-of-age after being so naive and not understanding the world or men. Bill Nighy deliciously caught the madness in his tormented genius role. But the film was not as good as its actors, as the script just had too many extras to properly digest. 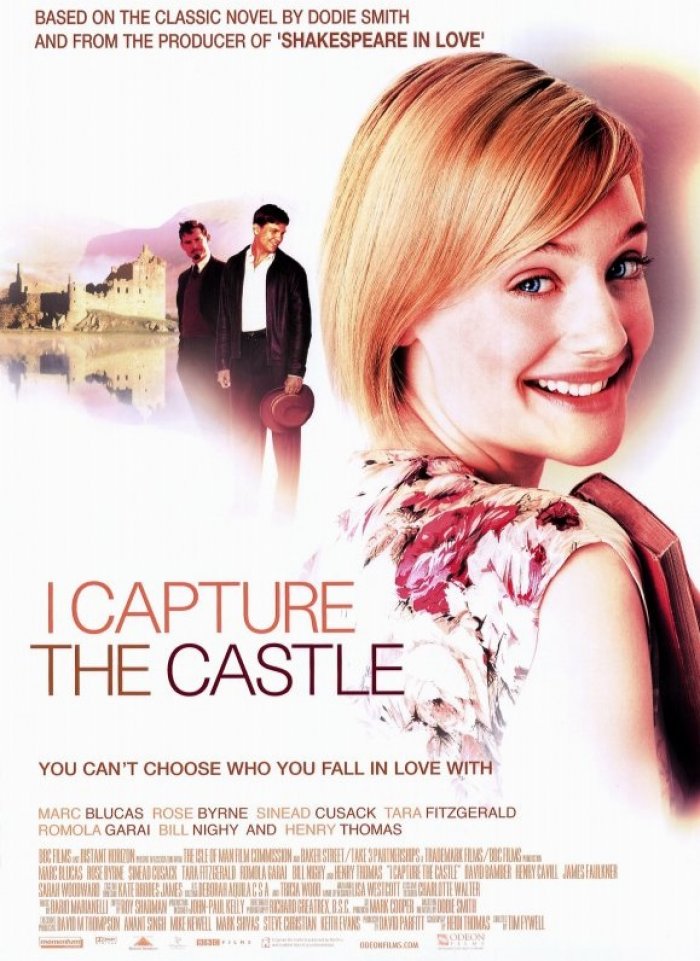