“It’s an entertaining, for its time, swashbuckling tale of revenge on the high seas.”

Albert Parker (“Troubled Waters”/”Shifting Sand”/”Eyes of Youth”) directs this adventure silent, shot in the primitive 2-strip Technicolor (it was Douglas Fairbank’s only color film). The writers are the film’s star, one of the most athletic and biggest stars of the silent era, Douglas Fairbanks, and Jack Cunningham. It’s an entertaining, for its time, swashbuckling tale of revenge on the high seas, meant as an escapist fantasy. Though lacking in narrative and characterization, we get to see how acrobatic the star can be. In the most famous stunt of his career, Fairbanks “descends from the ship’s mainmast to deck by piercing the sails with his knife and riding it as it cuts downward.” However some, without conclusive proof, maintain the stunt was performed by a double.

Pirates overtake on the high seas a Spanish cargo vessel. They loot and blow up the ship. There are two survivors, a father and a son Michel, the Spanish Duke of Arnoldo (Douglas Fairbanks). They end up marooned on a desert island, after swimming there. Soon the father dies and the son swears revenge. When the pirate captain (Anders Randolf) comes to the island to stash his plunder, he’s killed in a swordfight by the Duke. The victor bluffs his way into command of the pirate ship. Leading the pirates on a successful non-killing raid of a merchant ship, he’s given the name of the Black Pirate. The pirates capture the pretty Princess Isobel (Billie Dove) and plans are made by the buccaneer crew to take turns raping her, but the Black Pirate takes her hostage to hold her for a valuable ransom. It concludes with the Duke caught trying to escape with her, and made to walk the plank. But he escapes because a sympathetic pirate (Donald Crisp) loosen his rope binds. The Duke manages to swim ashore and return with underwater swimmers to rescue Isobel and get his sworn revenge,as he and the rescuers defeat the pirates. He also marries Isobel. 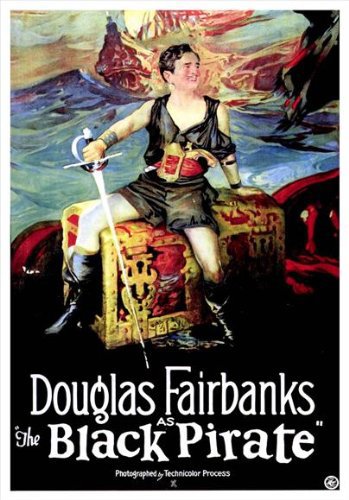 WHERE THE WILD THINGS ARE