A film that means well, but is too pushy in promoting its belabored point and too sentimental to be compelling as a drama. It’s Jeroen Krabbé’s melodrama about a community of Jews in Antwerp in 1972 who can’t forget their bitter past. The heroine is an attractive, carefree, nonreligious 20-year-old named Chaja (Fraser), who wants to forget her Jewish roots by getting involved in student demonstrations, screwing a student rebel leader, and living with her gentile friends away from her nagging mother (Sägebrecht) and her self-absorbed, eccentric father (Schell). Her parents are survivors of the concentration camps, and her home life is filled with angst. Her mother is in denial about the past, always busying herself by cooking soup and baking cakes and complaining about everything; while her father is more openly loving but has recently been absorbed in searching for two suitcases filled with mementos, a family album, silverware, and his old violin. He buried them in a garden during the war while fleeing the Nazis, but can’t locate them due to all the changes in the city.

Out of frustration after quitting her job as a dishwasher and facing eviction from her apartment, Chaja reluctantly accepts a job as a nanny with an Hasidic couple that an old man in her parents’ apartment building, Mr. Apfelschnitt (Topol), tells her about. The Hasidics are ultra-orthodox: they don’t go to the cinema or watch TV, adhere to strict dress codes, and strictly observe their religious laws.

Chaja is at first put off by the way they expect her to follow their rules but finds the wife, Mrs. Kalman (Rossellini), to be kind and she becomes attached to one of her 5 children, a 4-year-old named Simcha (Monty), who doesn’t talk. The stern Mr. Kalman (Krabbé) is not friendly and considers her to be a whore because of the way she dresses.

To hammer home the point of how anti-Semitism hasn’t gone away there’s a barrage of overdone and uninvolving scenes with a sneering Concierge (Bradley), who keeps making nasty remarks about Jews and tries to make things inconvenient for them by preventing the Jewish family from using the elevator.

The film is done in by its ham-fisted script as the story, adapted from Carl Friedman’s book “The Shovel And The Loom,” goes from one false note to another until it gets lost in all the goo of its sentimentality. It starts off telling Chaja’s story of how she’s a lost Jewess trying to find her identity, then to her nanny role as she loves a mute child stuck in an insulated environment, and then it makes it a story about her parents and the lingering effects of the bitter past that can’t be forgotten. The effort seemed heavy-handed, as the film kept delivering too many obvious messages that it ponderously kept delivering through the stock characters.

The supporting cast consists of all wooden characters: Chaja’s dazed parents and the janitor villain are uninteresting one-dimensional characters.

The only ones who fought through the script and showed some feelings were Fraser, whose effervescent face was expressive of both the trying times she was going through and the joys she felt — but most admirably showing how she could be so mistaken as to think that she could forget her roots; while Rossellini gave a warm performance of a woman suffering in silence, but is strong in accepting her faith. Topol’s reassuring performance as the wise man who says all the right things to Fraser, acts as the true voice of the filmmaker in explaining all the sufferings with common sense.

The film brazenly uses little Simcha to get across its agenda of pointing out how the patriarchal world can be cruel when it can’t love: it starts out by showing how under Chaja’s loving care he’s taken to the duck pond and soon starts jabbering away, beginning by saying ‘quack, quack’ and then going on to ask the four questions during a Passover Seder. But by showing how the boy is so terrified of his strict father that he wets his pants in his presence, refuses to speak because of his stern dad, and eventually becomes the victim of a tragic accident, the film thereby exploits the boy’s sufferings and his story just becomes tiresome.

I felt I didn’t just see a movie, but I attended a lecture. It was the kind of movie that you hoped would somehow end soon, as it seemed to be in the habit of rehashing its same viewpoint unnecessarily–as the message it keeps sending was already received. In the last shot where father and daughter are hopelessly digging for the lost luggage, one has the impression that no one in the film learned anything about themselves or the past. That seems strange, since I thought that was what this film was supposed to be about. Unless I was mistaken and the film’s real aim was to make us cry over Simcha and his death. 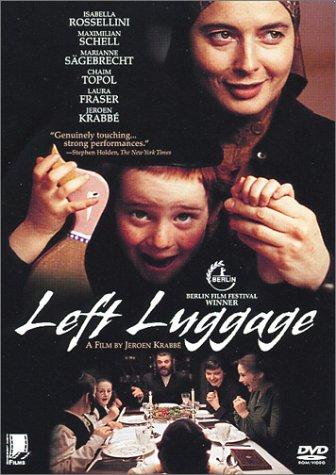