HELL IS FOR HEROES

A fairly-routine WW11 action-packed film. The fighting scenes looked artificial but the story line had a psychological edge coming by way of the embittered John Reese (McQueen), who seems to have an attitude problem, or maybe a psychological one, or maybe a social problem fitting in and following the rules. He seems to do fine in battle but tends to crack when not in combat. He was a top-sergeant, but was recently busted to a private for stealing a Jeep.

The best thing that could be said about the film is that it avoids a lot of the usual cornball war film clichés about the brotherhood between the troops. This film was once viewed as a typical war movie but now because of Siegel’s rising star as a director, it has been granted “cult status” which resulted in receiving much higher praise than I think it deserves.

This was director Robert Parrish’s long-time baby but he didn’t get along with the impetuous Mr. McQueen, so he was removed from the film and replaced by Siegel. At first McQueen and Siegel failed to see eye-to-eye, but they patched things up and became lifetime friends as a result. What Siegel did for this B&W film, along with WW11 expert Robert Pirosh as screenwriter, was tighten up the script, make it more suspenseful, and emphasize the psychological differences between the men of the 2nd squad and the pathological attitude of the McQueen character.

The film opens in Montigny, France, in 1944, in an area near the Siegfried line. Sergeant Larkin’s (Guardino) men are anxious to go home but instead they will be sent back to the front line. Reese has just been assigned to the unit and acts bottled-up and angry. He’s a good soldier and knew the current top-sergeant, Pike (Fess), when both were in the North African campaign.

The 2nd Squad is given a raw deal as they are left behind while their company moves out, and the six squad men are ordered to make it appear to the Germans that they are being held at bay by a larger group. The Germans have a fortified pillbox machine gun nest in which to fire at will on the men. The problem for the squad, becomes that the Germans will soon figure out that there are not many soldiers there and will attack them.

Private Driscoll (Newhart) drives his jeep into the area by mistake, as he lost his way to division headquarters. The men see this as an opportunity to requisition his jeep and have their demolition expert, Corporal Henshaw (Coburn), rig it up so that it sounds like a tank. Driscoll, the green combat soldier, is made to volunteer by Larkin into joining the combat outfit where he is taught to fire a gun by Private Corby (Darin), the company’s hustler — dispensing items like pens and selling them to the troops for a hefty profit.

This very masculine old-fashioned film, no wartime sex here or female stars, also features Homer (Nick Adams) as an overeager Polish partisan; Private Cumberly (Mullikin), who says he has a system to keep him sane: “When everything is bad–I think of something that was worst;” A gung-ho captain (Hoover); and, a nondescript private (Kellin).

Larkin gets the men to wire empty ammo cans to the trees, fooling the Germans by the noise they make, allowing them to think that they are a large group. They also discover a listening device the German’s rigged, so that they could hear any calls to headquarters they make. After the men spot this, Newhart goes into a telephone routine he used as a stand-up comedian, but only here it is not funny and seems out of place.

This is a film that builds in tension until its brutal payoff. Critic Manny Farber said it was “termite art”—-that which burrows under and gets inside its subject rather than indulging in rhetoric.

Soon a friction develops between Larkin and Reese, as Larkin feels that his authority is being challenged. When Reese says that if they wait here the Germans will attack and kill them all, that the thing to do is attack them first. The men seem to think that this makes sense. But Larkin says his orders are to stay put and not attack, to wait for company reinforcements and not do anything until he clears it with Pike.

When Larkin goes to find Pike, he can’t find him at headquarters. The men, on their own initiative, fake a patrol over at the German line, but Henshaw trips one of the landmines in the field and the place becomes a shooting gallery.

The climactic battle takes place right after Captain Loomis says he will court-martial Reese for giving orders to attack the German pillbox and getting a few of the men killed, when he had no authority to do so.

Pike in a friendly gesture asks Reese: “Were you right?” Reese responds: “How the hell do I know.”

The men prepare to attack the German pillbox, as the film can make claim to its anti-war sentiments by showing the insanity of the attack. The McQueen character fights his own demons; and, to the Germans, he appears as a one-man army. 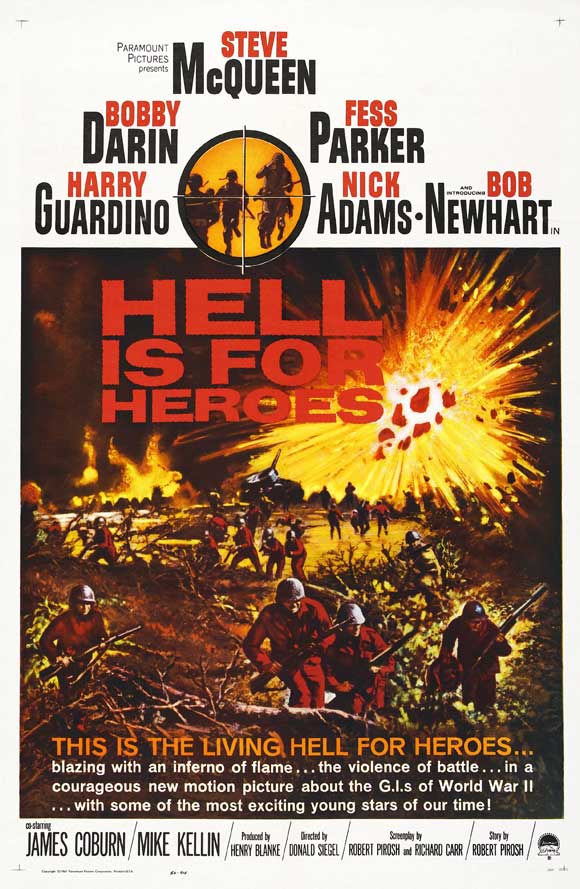