“It takes the nerd revenge film genre to new lows.“

A straight-to-video copycat teen slasher film by writer, director, producer and star Eric Spudic. Bad films hardly come any worse. It takes the nerd revenge film genre to new lows. The only thing the film did really well was keep everything sleazy. Its inspirational message is that with the new technology available, anyone can make a shoestring budget film. What’s so funny is that all the comic antics attempted failed to be funny or emerge as anything more than juvenile.

The plot revolves around two High School losers, Cory (Jason Contini) and Jeff (Eric Spudic). While waiting for his party guests to arrive, Jeff jerks off to a porn flick. Cory becomes the lone guest. The two awkwardly talk about their recent High School days and how they were always being picked on in school by bullies for being nerds. After drinking a number of beers, the two get up enough nerve to don ski masks and go after the bullies seeking revenge. Their costumed scare prank leads to the murder of the overweight bully Nick, who was supposed to be hit only in the leg with a dart fired from a cross-bow but gets it in the neck. Bully number two, Benico, bicycles by the suburban Mt. Olive house of Nick’s and discovers his friend’s dead body on the lawn. He pelts the nerds with eggs but is overtaken and bludgeoned to death with a crow-bar. Next on the list is the stuck-up bitchy High School classmate Lacey Dekker, who gets tied up and slain.

The out of control boys refer to themselves as “Born to be Killers,” and continue on their killing spree until the blood-splattered conclusion.

There was just nada that was even mildly interesting. The filmmaker has no solid movie instincts to draw out social satire, make his weird characters anything but shrill or lay down some decent dialogue. The only thing I still remember about the film was that one of the characters wore a T-shirt that said “Roadkill.” Now that should sell in certain quarters! 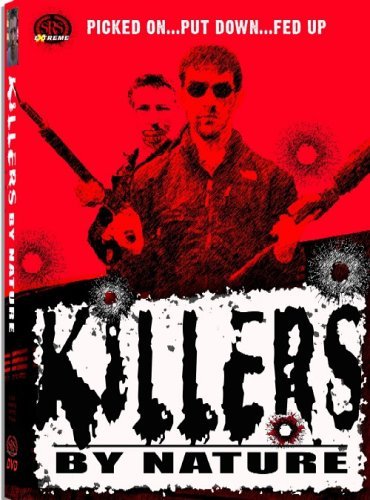