GOOD, THE BAD AND THE UGLY, THE (IL BUONO, IL BRUTTO, IL CATTIVO)

“Its parody of genre conventions resonates with scope and power.”

Italian director Sergio Leone (“Once Upon a Time in The West”/”A Fistful of Dollars”/”The Colossus of Rhodes”) creates a cynical stylish unflinchingly violent spaghetti western that mocks the genre by showing the dark seedy side of the west and with its success became very influential in the western genre. It’s known technically for its beautiful visuals and its long take close-ups. This is the final, most popular and the best installment of Leone’s Dollars trilogy. Leone writes it with Sergio Donati, Agenore Incrocci and Furio Scarpelli, and it’s based on a story by Leone and Luciano Vincenzoni. The superb whistling score by Ennio Morricone perfectly fits the film’s theme and greatly enriches the story–it might be the composer’s most memorable theme he ever wrote. It was made on a budget of $1.2 million, and was filmed in Rome, Italy, and Almera, Spain. Leone was a history buff, who went to great lengths to get the Civil War uniforms and history parts correct.

Clint Eastwood is depicted as the Good, a taciturn, enigmatic loner with no name (though called Blondie by the Mexican bandit). Lee Van Cleef plays Angel Eyes Sentenza, the Bad, a ruthless and amoral bounty hunter, and Eli Wallach is Tuco, the Ugly, a vicious Mexican bandit with a lifetime of crime. Though it’s not easy to tell who’s good, bad or ugly, the way the characters are identified scores as black comedy and as an ironical jab at the way the classic westerns portrayed its icons.

For Leone the true West was filled with violence, death, and a depopulated arid region. The setting is during the American Civil War, which gives Leone a chance to take pot shots at the bloody war and how profit influences everything–making it hard to tell the good guys from the bad guys.

Clint and Eli partner in a scheme to collect the $2,000 and then $3,000 reward money on the bandit’s head, with Clint repeatedly capturing and then freeing him from the rope. Their partnership is dissolved when Clint double-crosses him, but is on again when they team up to search for the $200,000 missing stolen Confederate gold coins in an unmarked grave out west. Also tagging after the loot is the opportunistic Van Cleef. No one can be trusted and not even the Civil War is allowed to get in their way, as the hardened characters follow the money trail in a sun-drenched barren landscapes.

The groundbreaking, grandiose, offensive spaghetti western is great entertainment. Its parody of genre conventions resonates with scope and power, making it easy to enjoy the spectacle. 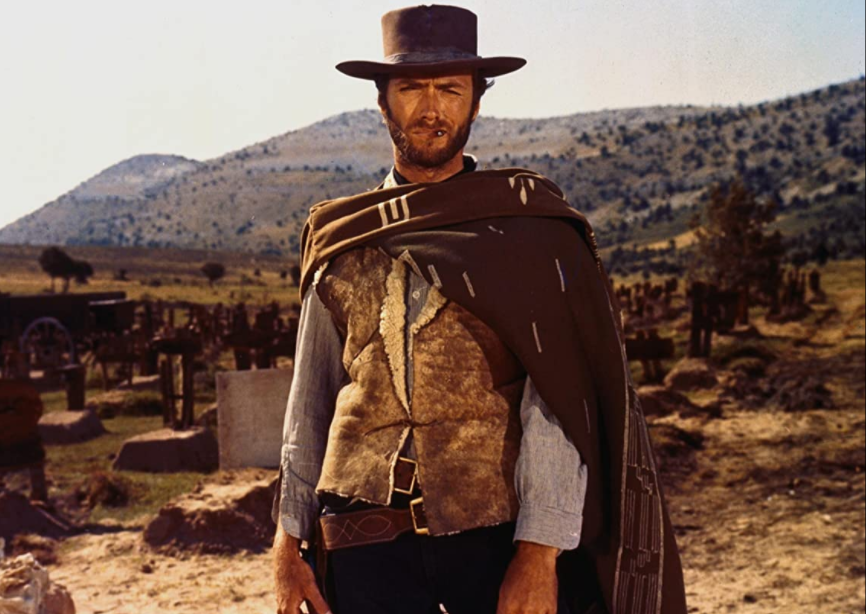