“Mandatory viewing for even the casual moviegoer.”

The best Hollywood musical of all time, or at least the most popular and the most colorfully shot and one of the most free-spirited fun films that was an original and not taken from the stage. It’s co-directed by Stanley Donen and Gene Kelly, with the latter doing the dance numbers and starring. Gene acted like a real trouper doing his best musical numbers despite a heavy cold. It’s written with tender loving care by the capable Betty Comden and Adolph Green team, who bring their insider’s knowledge of the Hollywood community in a playful way. The many grand musical numbers adapted as nostalgia pieces from the 1920s and 1930s were written by Arthur Freed and Nacio Herb Brown, who worked on the music for MGMs first all-talking musical film. The songs include “Singin’ in the Rain,” “Make ‘Em Laugh,” “Broadway Melody,””You Are My Lucky Star,” “You Were Meant for Me,” “Moses Supposes” and “All I Do Is Dream of You.” Though the Arthur Freed song “Make ‘Em Laugh” is a rip-off from Cole Porter’s “Be A Clown” used in The Pirate.

“Singin’ In The Rain” is mandatory viewing for even the casual moviegoer. The plot revolves around a famous actress and her inability to adjust from “silent” to “talkie” pictures. But the plot doesn’t matter, it is really the energetic song and dance numbers that count the most. The 39-year-old Gene whoops it up in the rain. Future star, the talented 26-year-old Donald O’Connor plays second banana to Gene and distinguishes himself by contorting his face and body in comical gestures that play along with the music. The all-American cutey pie Debbie Reynolds is pressed into watching that her dance steps are exactly executed, as perfectionist choreographer Gene is very demanding of all the dancers. While Jean Hagen as the ditsy vulgarian silent screen star with the abrasive squeaky voice and heavy Brooklyn accent, who in the film has her singing voice dubbed by Debbie; ironically, in reality, Hagen dubs the singing voice for her.

The film opens in 1927, in Hollywood, to the premiere of The Royal Rascal, the latest smash hit for the silent screen romantic duo of Don Lockwood (Gene Kelly) and Lina Lamont (Jean Hagen) — the most celebrated actors in Tinseltown. Upon a question from the fawning press, Gene tells how he worked his way up to stardom though hiding the truth of his humble upbringing by exaggerating his status and his true start as a vaudevillian then turned stuntman and finally catching a lucky break to become a big box-office star.

Gene and Lamont are linked together on the screen and the publicity department cooks up their romance continuing outside the pictures for publicity. But in reality Gene can’t stomach the uncultured, untalented and vain actress. He has fallen for ‘chorus girl nobody’ the sweet and talented Kathy Selden (Debbie Selden). After a series of misunderstandings they are brought together when the studio switches to talkies and they realize Lamont can’t cut it and decide to remake The Dueling Cavalier into a musical renamed The Dancing Cavalier with Kathy dubbing the voice of Lamont before it opens, after a failed preview had the audience in stitches and commentating it was the worst film ever made.

Cosmo Brown (Donald O’Connor) is Gene’s best pal since childhood and is the piano player for his silent pictures. Upon the arrival of the talkies, Cosmo’s new job description is the musical director of Monumental Pictures, as he’s given a raise and promoted by studio head R. F. Simpson (Millard Mitchell).

The film succeeds as a celebration for Hollywood romance and glitzy music and the studio system, as it raises escapist entertainment to lofty heights approaching a work of art. 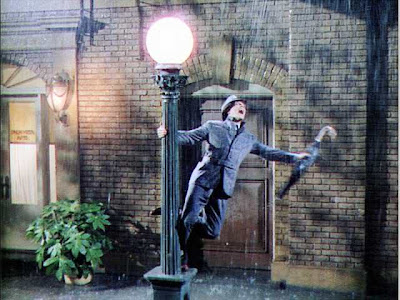 NIGHT OF THE COBRA WOMAN

RED AND THE WHITE, THE