“The only problem with the film, is that it’s more of a play than a cinematic experience.”

This is a stagy film adapted from Roger Rueff’s play “Hospitality Suite.”It’s about three travelling salesmen attending an industrial convention, whose Chicago company has sent them to Wichita, where the company has paid all their expenses. They rent a hospitality suite on the 16th floor of the hotel, aiming to score a substantial account from the Big Kahuna, Dick Fuller, who is the head of a big industrial corporation. Fuller is someone they have never met before, but they want to sell him industrial lubricants and they want desperately to land this new account.

“The Big Kahuna” revels in salesmen talk among the three white Christian males two of them, Larry (Spacey) and Phil (DeVito), are veteran salesmen having teamed together for the last twelve years, while Bob (Facinelli) is a young man who has just recently been hired by the firm to work in the research department. These three are virtually imprisoned in their small hospitality suite waiting to meet the Big Kahuna, as the focus of this claustrophobic film is on their interactions while waiting to make their sales pitch.

The three salesmen are troubled by different life experiences involving personal things, changing job attitudes, and internal changes that are profoundly altering their lives. What comes into question is their opinions on life and death, on God and morality, and on how they make a living. Their dialogue is acerbic, witty, and analytical, following in the long tradition of salesmen films from — Death of a Salesman, The Tin Men, and Glengarry Glen Ross. This film tries to get you to see what there is about salesmanship that gets these men high. In this case, it appears to be in landing the Big Kahuna. They each are trying to see why he’s on top and why they are chasing after him. What makes this film different from the others of this genre is its blatant religious message comparing orthodox religion to what they do, as both must sell their product. It also shows how after the psyches of the two veterans are stripped clean some lesson about life has sunk in causing a mid-life crisis, while the younger man thinks he is prepared to go out in the world feeling that he can freely do his job without changing his beliefs. The goal in the movie is not in literally landing the Big Kahuna, but in finding out what bill of goods each of the men sold themselves to be working as salesmen.

Larry and Phil have one way of doing things and have no qualms of incorporating a sales pitch as part of their everyday life. Bob thinks he is above the fray and he pitches every chance he can get about his belief in Jesus Christ. His vacuous character and smug outlook on life are covered by a disarming smile, and an eagerness for him to prove in his actions the words of the Jesus he literally believes in.

Bob is a Baptist, who takes a very non-questioning attitude about religion. To just look at another woman and lust after her is a sin, according to the way he reads the Bible. When asked by Larry why he married his wife he seems puzzled and can’t even say because he loves her, only that marriage is something sacred to him.

The contrast in their personalities is stark. Larry is all business, he simply wants to close the sale. He comes into the room pumped for the convention, using his attack mode to establish how serious he is about being a salesman. Larry criticizes Phil for being so placid, for getting such a small suite, for having the cheap food tray of carrot sticks rather than the one of stuffed shrimp, and for being burnt-out. He tells him to go on a vacation. Get a woman!

While Phil is contemplating a career change, now that he is 52 and is undergoing a painful divorce, after having lived too lonely a life on the road for too long. Phil now finds himself suffering from some troubling dreams and questioning what he believes in. Phil has always been a charmer, shaking everyone’s hand, trying to please his clients while trying to make the sale, but is beginning to have doubts about how he has conducted his life.

Larry is the more aggressive salesman, he is always a heart attack away from every big sale. In contrast, Bob is only in his twenties and everything seems fresh to him. This is the first time for him on the road.

When Dick Fuller doesn’t arrive at the party the salesmen throw, Larry becomes confrontational and asks Phil if he spoke to the man himself about the gathering. When told that he spoke to the secretary, Larry throws a tantrum and is resigned to going back to their home office without the new account. But when they start talking to Bob, whom they forced to act as the bartender, they are surprised to learn that Fuller did indeed come but was wearing another man’s name tag and that Bob spent the entire evening consoling the tycoon over his recently deceased dog and then talking to him about Jesus.

Bob tells the boys about a private party Fuller is attending afterwards, and that he invited Bob to attend. Larry and Phil can’t fathom how Bob didn’t make a sales pitch. But they soon take another tact and decide to prep Bob on how to get Fuller’s attention about their company’s product as they send him off to meet Fuller, and will await his return in the hotel room. These two sharp salesmen are reduced to waiting for this smug kid to come back and tell them he saved their ass. The irony of their situation is played out in the darkness of the hotel room, as they stay up late into the night trying to make sense out of their lives.

These three were outstanding, each understanding what their role called for, each coming through with a marvelous performance. The only problem with the film, is that it’s more of a play than a cinematic experience. But the insightful dialogue and refreshing dramatics, give it an intelligent selling point as they pitch their product. 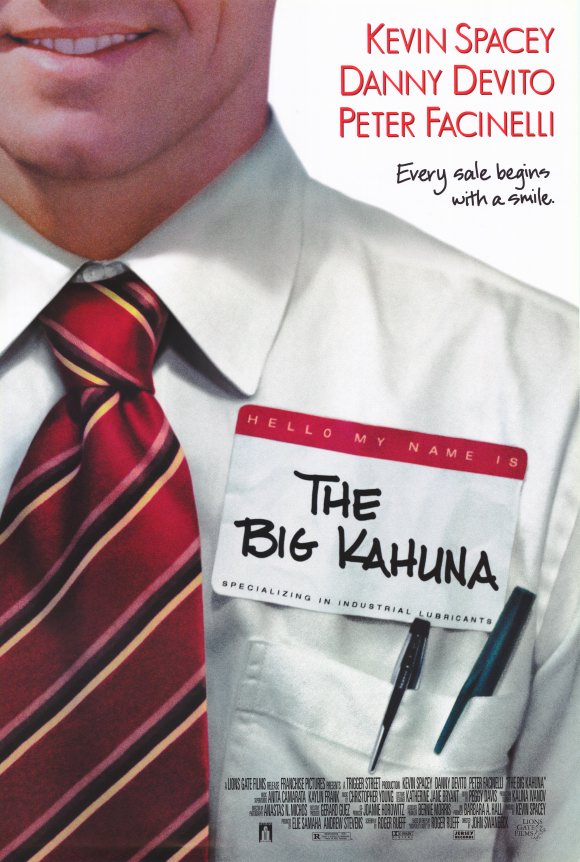 WHERE THE MONEY IS

REVOLT OF MAMIE STOVER, THE