This wasn’t a bad film, as much as it was a mediocre one. It is taken from a paper-thin story by the renown pulp writer of the vox populi, John Grisham (the screenplay is credited to Al Hayes, but rumored to have been re-written by Robert Altman). It was directed with misdirection by the legendary director Robert Altman (M*A*S*H (69)/ McCabe & Mrs. Miller (71)/ The Long Goodbye(73)/Nashville(75)), who has never directed a thriller quite like this one before and it shows that his enormous talent, probably, does not lie with this genre. The only thing that saves this movie from being a complete bust, is the marvelously energetic cast. They took this inane formula story seriously and did a fine job in keeping it going.

In particular, I liked Duvall’s Dixon Doss portrayal as the insane father of Mallory Doss (Davidtz). A minor part for Duvall but a good diversion from the constantly intense and impetuous performance of Branagh’s (Magruder) amoral, Southern accented, slick Savannah lawyer. Branagh might be a capable British Shakespearean actor but he has a tendency to chew up his scenes.

That Altman did such a haphazard job in directing this thriller is proven in the first fifteen minutes, when he gives away the plot by anxiously holding his attention too long on an obvious setup situation. If you didn’t know that the lawyer was going to be setup by the low-life Mallory who literally throws her nude body on this divorced father/lawyer, whose only redeeming quality is that he loves his children, then you must have been out getting popcorn in the lobby. As a result, with all the tension taken out from the very beginning, the only reason for seeing the rest of the film is to watch how well the actors work.

The plot revolves around a surprise party given for Magruder, who is coming off a victory in court where he got his client off by castigating the police. Here he meets the waitress Mallory during a rainstorm and offers her a ride home after her car is missing. Once at home, the seduction takes place. The obvious setup begins and Magruder is unwittingly drawn into a whacky families’ dirty business.

Magruder becomes Mallory’s lawyer, and accuses her father of stalking and harassing her. Mallory succeeds in getting him put away. But the dangerous father escapes and begins to make not only the life of his daughter hell but also her lawyer’s life, as he kidnaps Magruder’s child.

When the best part of the movie for me is watching a hurricane fill the screen, then I’m certain that I haven’t been swept away the melodramatics. There was, as far as I could tell, no particular character development, no intense drama, and no new insights into the judicial system. I found myself trying to figure out why there is such a huge market for Grisham’s stories, and it sure beats me!

The film becomes an Actor’s Studio venture, with the following characters acting out their supporting roles with varying degrees of effectiveness: Clyde Pell (Robert Downey Jr.) appears to be the most likable one in the film, playing a fun loving alcoholic private eye and buddy of Magruder. Pete Randle (Tom) is scary as Mallory’s ex-husband. Daryll Hannah is the busybody aide in Magruder’s office. Famke Janssen is Leeanne, Rick’s nondescript ex-wife. 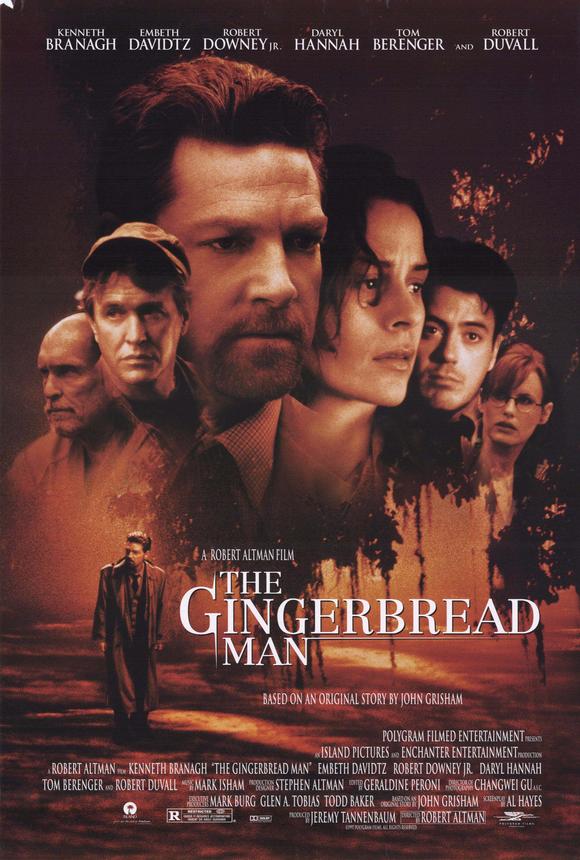