DR. WHO AND THE DALEKS

“A film not only for children but for adults who are undemanding.”

The first of two big-screen offerings of the popular BBC sci-fi series. It was the first time it was filmed in color. Director Gordon Flemyng(“The Split”/”Daleks-Invasion Earth 2150 A. D.”/”Great Catherine”) keeps things grounded as a family adventure film revolving around a time machine. It’s a film not only for children but for adults who are undemanding. It’s based on a limp screenplay by Milton Subotsky, that took many liberties with the BBC show. The TV show ran until 1989, ending a 26 year run.

The older Barbara (Jennie Linden) and the youngster Susan (Roberta Tovey), and their beloved absent-minded eccentric inventor grandfather, Dr. Who (Peterr Cushing), are visited by Barbara’s klutzy boyfriend Ian (Roy Castle), who accidentally steps on T.A.R.D.I.S. (an acronym for Time and Relative Dimensions in Space), Dr.Who’s time machine, a machine that looks like a British police box, and it starts. The foursome land in a petrified forest in outer space and are taken as prisoners to the war-ravaged planet Skaro by the evil mutant Daleks, who rule the planet. The Daleks must wrap themselves around metal cones to stave off the radiation released from countless nuclear wars. They go after the pacifist Thals, who don’t wear any protection because they invented a drug that keeps them immune from the radiation. Dr. Who offers his services to the good guy outsider Thals tribe, and prepares for a trip back to Earth, as the Daleks prepare to nuke the Thals unless they give them the secrets of how to manufacture the drug.

It was filmed at Shepperton Studios, where imaginative sets kept things at least visually watchable, if nothing else. 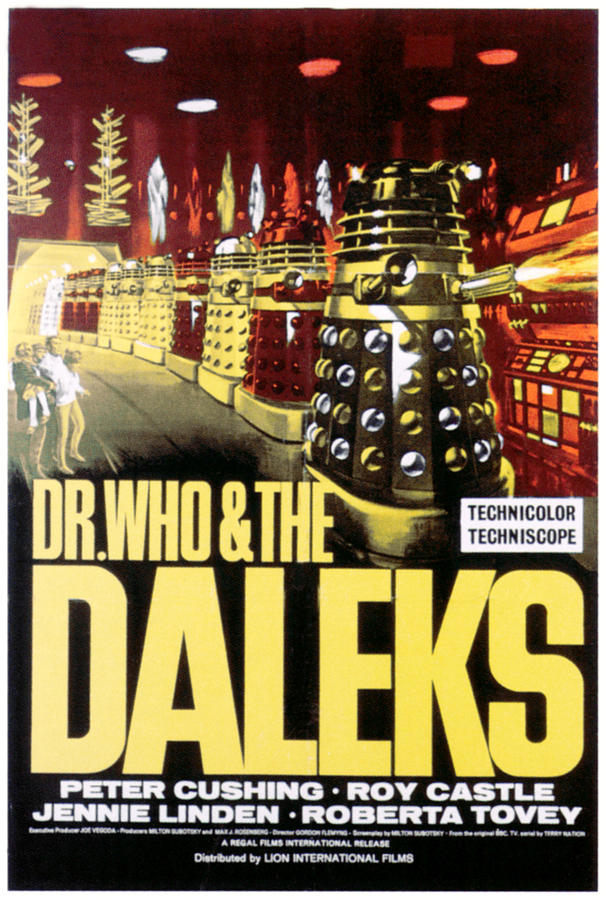