The wartime musical/comedy Panama Hattie was a hit on Broadway for songwriter Cole Porter and its star Ethel Merman. As a film it was a bomb when first released to a preview audience, but the studio spent big money reshooting and adding a few scenes–which paid off into making it a box office success some 11 months later when released. The sprightly Ann Sothern takes Merman’s role and sings “I’ve Still Got My Health.” The Broadway diva was never sought after by Hollywood, while Sothern never became a Hollywood star though prepped to become one.

It’s only the Cole Porter songs that keep things watchable. The film is noteworthy for being the first film at MGM for legendary black singer Lena Horne, who had no role but would sing two songs (therefore the studio could easily edit her out of the film for the racist Dixie crowd). One song was “Just One of those Things,” the other was “The Sping.” 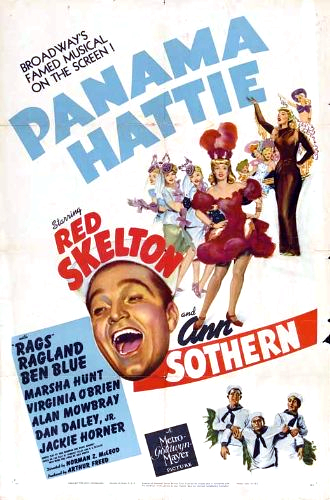