Badge 373 is based on the career of real-life decorated Irish NYC cop Eddie Egan, played by Robert Duvall under the name Eddie Ryan. The best thing I can say about it, is that it was realistic in its depiction of violence and use of profanity. It’s a tough, grizzly, obnoxious NYC cop movie, that tries to cash in on the success of The French Connection and outdo Dirty Harry in its titillating attempts to satisfy a public frustrated over the rise of crime. Howard W. Koch is the workmanlike director, while the script is handled without any soft edges by veteran NYC newspaper reporter Pete Hamill. If you like a vile and humorless crime thriller that does not do itself proud, then this nasty one is your baby.

Duvall is kicked off the force after falsely blamed for throwing a Puerto Rican suspect off the roof. Never mind that he’s innocent of the charge, he nevertheless has some racism in him or is it black humor, as he calls those he battles against spics and spades. When his partner is killed for being involved with Puerto Rican gunrunners, Duvall takes it upon himself to go after the syndicate. In the process he turns in his badge 373 and goes on a one-man crusade turning NYC upside down. His main target becomes Harvard grad Sweet Willie (Darrow), an Hispanic criminal mastermind.

Badge 373 lacks flair, integrity and ethnic sensitivity, and is for the most part a flat-footed movie (See what you get when you start using slurs so casually!). 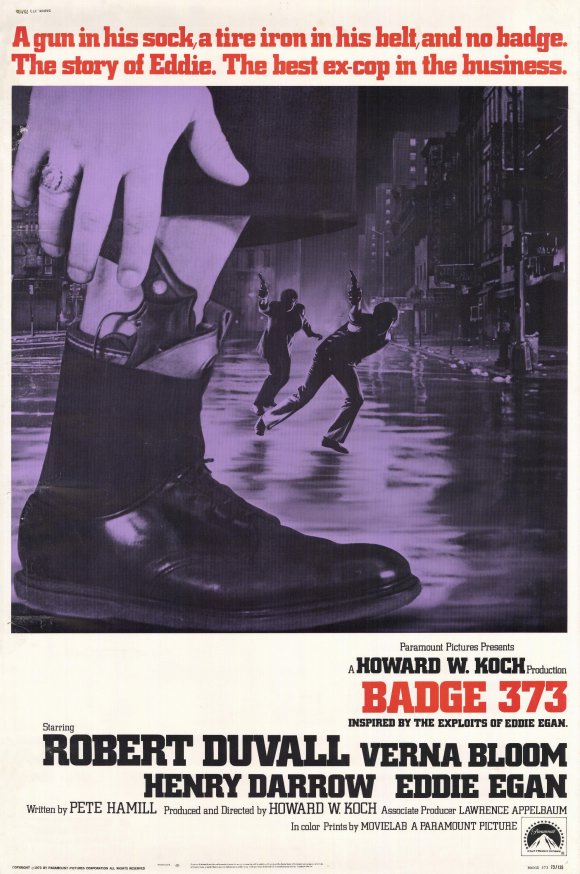 LOVE IS THE DEVIL

NIGHT OF THE LEPUS