Harold Lloyd (“Safety Last”) and Hal Roach met as extras on the Hollywood lot in the early 1900s and became friends. When Roach came into a tidy inheritance, he started producing his own films. By the time 1922 rolled around Lloyd was a top-grossing Hollywood star, and he signed a lucrative contract with Roach insuring eighty percent of the profit. According to TMC’s host Robert Osborne, the film netted a profit of 1.3 million dollars which was more than ten times what the film cost. With that being said, this acrobatic/sight gag comedy format, which might be a fine example of what the silent screen had to offer, fails to hold up to scrutiny in modern times. Lloyd’s do-gooder characterization of Dr. Jackson becomes grating and the low-brow comedy takes easy target practice on the villainous scheming quack doctor, who acts as the one-dimensional foil.

The film follows one day in the life of Dr. Jack, a young country doctor with a sense of humor and commitment to treat the whole patient and not only the illness. We follow him as he gets into his car rushing to make his first house call; when the car breaks down he hops a ride with a motorcycle cop; when knocked off the motorcycle without the driver realizing it, Dr. Jack goes by bicycle to the farmhouse of an elementary schoolboy pretending to be sick so he can miss school. Dr. Jack tells mom the school burned down and the youngster gives up his pretense to the chagrin of the mother. Next sick call is to an elderly mother, whose lawyer son (C. Norman Hammond) never visits. Doc guesses that’s what’s ailing her and tricks the son into visiting, as mom miraculously recovers. The lawyer is close friends with a wealthy family, and believes the old fogy doctor treating their sick girl needs a consulting physician to offer a second opinion and recommends Dr. Jack to the girl’s father. Dr. Jack is received poorly by the arrogant Dr. Ludwig von Saulsbourg (Eric Mayne), who is getting rich treating the girl, referred to as The Sick-Little-Well-Girl (Mildred Davis), even though she obviously has nothing wrong with her. Dr. Jack comes to the girl’s aid, and causes Saulsbourg to have a nervous breakdown as he dons a monster lunatic disguise to chase the fraud around the house. The excitement makes the girl come to life and becomes her cure. Rescued from sitting in darkened rooms, taking medicines, and being stuck in Saulsbourg’s private sanitarium, the girl falls in love with Dr. Jack and the quack is fired. They probably weren’t acting as far as the romance was concerned, because soon after the film Lloyd married Davis. 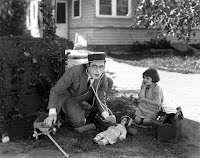 ONE FLEW OVER THE CUCKOO’S NEST