DEAD HEAT ON A MERRY-GO-ROUND

“Lags until it hits the climactic caper scene.“

Reviewed by Dennis SchwartzAn intricate and quirky caper movie about a con man ex-convict, Eli Kotch (James Coburn), who breaks parole in San Francisco and schemes to rob the bank at the Los Angeles International Airport on the day the Russian premier is visiting. Writer-director Bernard Girard (“A Name For Evil”/”The Mad Room”/”As You Were”) brings to the table an intriguing title, an intriguing premise and a playful amoral ending, but it’s murky sledding throughout and lags until it hits the climactic caper scene.

After the smoothie convict sweet talks the prison psychiatrist (Marion Moses), he’s granted parole and then skips town as a parole violator after seducing her. Eli then plots with his former crime pals to pull off the bank heist, but first needs to buy a blueprint of the bank for $90,000. The narcissistic crook is someone the more toothsome he becomes the more despicable he appears. To raise that large sum and hire his crew, Eli pulls off numerous con artist ventures in Denver and Boston while posing under an alias as a Swiss shoeclerk, a termite exterminator, a Knights of Columbus delegate, and an Australian police inspector transporting a prisoner, Eddie Hart (Aldo Ray), back to Australia on the day of the premier’s visit. He also finds the time to pose as a writer to marry the innocent beautiful private secretary of a Boston millionairess, Inger Knudson (Camilla Sparv, Swedish beauty), only to leave in the lurch when he tells her his naval reserve unit has been called to active duty.There’s a twist ending to this ‘crime does pay’ drama, in which Eli pulls off with Eddie, Paul Feng (Michael Strong) and Miles Fisher (Severn Darden) the successful heist. But the smug Eli while aboard a plane to Mexico with his fellow robbers gets outsmarted without realizing it–as the plot offers a weak come-uppance for the womanizing pig.

The title refers to a novel Eli claims to be writing when he first meets Inger, but that’s really just another lie told on the way to the heist. Harrison Ford at 24 makes his movie debut in a one-line performance as a bellhop delivering a telegram to Coburn.

The film seemed too detached and schematic to work on all cylinders, as Coburn’s rogue charmer character was chillingly enigmatic and all the complexities involved in the heist seemed too much of a stretch. This gave the film a cold feeling that I couldn’t warm up to. 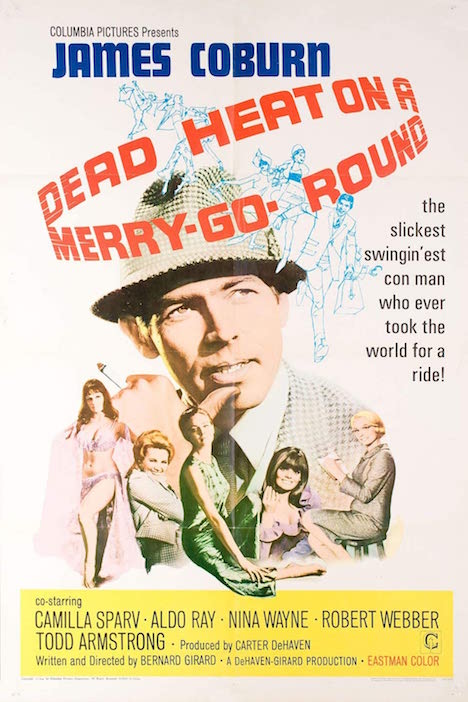