“Sometimes it’s fun to feast on a junk film.“

Peter Jackson (“Bad Taste”/”Meet The Feebles”) directs this gory horror comedy. It tells of zombies on the prowl in 1957. It’s outrageously written as camp by Jackson, Fran Walsh and Stephen Sinclair, from a story by Sinclair.

The plot revolves around the harridan mother (Elizabeth Moody) of the nerdy, mama’s boy, Lionel (Tim Balme), bitten in the Wellington, New Zealand zoo by an animated Sumatran rat/monkey, while chaperoning her son on his first date with Paquita (Diana Penalver).

When mom is home and dining with church guests, she’s changed into a zombie after dining on her ears. When the loyal son is unwilling to chop up his flesh-eating zombie mom, the house will soon include an army of zombies hiding in the basement.

The cartoonish over-the-top carnage includes the spewing of blood and bile of such various folks as a kung-fu priest (Stuart Devenie), a nurse (Brenda Kendall), the sleazy uncle (Ian Watkin) and some rockers–there are many decapitations, a gut-munching and various forms of dismemberment. It’s up to Lionel, using a power lawn-mower, to fend off the attacking zombies.

The silly but entertaining cult film, with mostly bad taste slapstick gags, perhaps tells us that sometimes it’s fun to feast on a junk film. I applaud that the low-budget film is so well-crafted and weirdly funny. 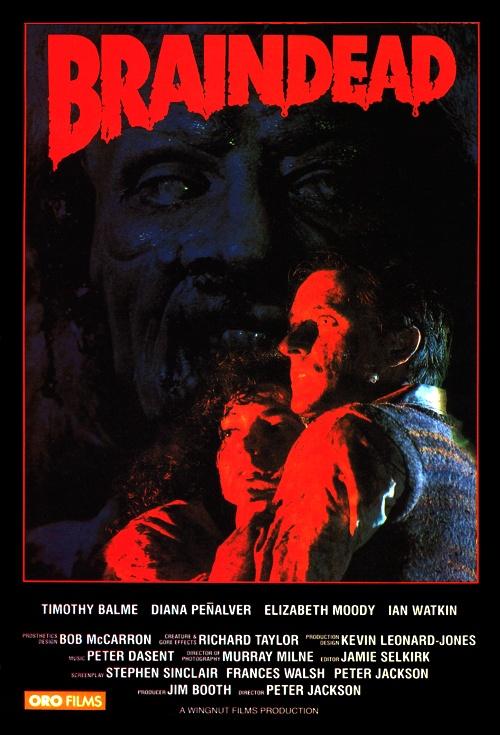