“The film is so deeply evocative…”

Reportedly Satyajit Ray said of all the films he directed, that this was his favorite. It is based on Rabindranath Tagore’s controversial novella, depicting a lonely wife’s flirtation with her husband’s younger cousin, Amal (Soumitr). It takes place during the Victorian era, when India was under British rule. The story unfolds in an opulent 1879 Calcutta household, giving it a spicy Bengali flavor.

Though the plot is simple the human emotions are not and the chance for observing how one feels is maximized in the very perfect structure that Ray has created for the film as Charulata (Madhabi), called Charu, is the neglected and sensitive wife of a newspaper man, Bhupati (Shailen), who is consumed with the politics of the day. His paper’s logo being, “The Truth Is What Survives.” He takes pride in his Anglican witticisms and the fact that he is not one of those idle rich, but is working hard and doing something that is important. At one point of the film his face turns to glee as he is in his newspaper’s press room and he exclaims that he just loves the smell of the ink press, there is nothing better in the world than that smell.

There is a certain feeling to this b/w illustriously photographed film that reflects Ray’s belief that life is a continual rhythm of birth and death, one is complete because of the other. What breaks out in streams of genius (love) are what volcanically erupts in this rhythmic living flow and what gives sustenance to new beginnings, is the force of nature that wells up as reflected in Charu. When the playful 23-year-old Amal, the opposite of his practical 35-year-old cousin, is encouraged by her husband to keep the lonely Charu company and tutor her, which Amal does by reading her poetry, that awakens her hidden nature. It allows Charu a chance to realize for the first time in her life what love for someone else feels like as it churns inside her, quite unexpectedly, while being with Amal.

Amal is too self-absorbed and loyal to his cousin to notice, or to even contemplate what is happening, until later on; and, at that time, he reacts by leaving the house and not acting on his true desires.

The huge house is Charu’s domain as she prances around in it with her hand-made embroidered slippers and her opera glasses, which she coquettishly uses to spy on people. She is bored-silly talking prattle with Manda (Gitali), the wife of the newspaper’s manager, whose main pleasure in life seems to be when she is having ice cream. From her second floor bedroom window, Charu will view her kindly but preoccupied husband from this distance with the same equilibrium she reserves for the glances she imparts on the strangers passing by.

Amal writes his literary piece and gets it published in a prestigious magazine called “The Lotus,” which inspires Charu to let go of her inhibitions. An inventive bit of photography is used by Ray, undoubtedly influenced by the French New Wave cinema, where we see Charu’s mind in a vortex of activity recalling her past experiences in the village she was brought up in. This turns into her literary piece, published in the other prestigious magazine “The Philanthrope,” which surprises her husband when his friend Nishikanta (Suku) tells him this as he is celebrating with his newspaper friends the victory of Gladstone and the Liberals in England. They are elated by that victory because the new government will benefit India more than the former ruling party, the Tories, did.

The pivotal point is reached by the betrayal of Bhupati by someone he completely trusted and made the manager of the newspaper and keeper of the money, Umapada (Ghoshal). Bhupati fails to make payments to keep the paper going and absconds with the stolen money bankrupting the paper and breaking the heart of Bhupati, who feels that by losing the paper he has lost his co-wife.

This is a film that is visually poetic, stunning in its perceptive recognitions of life in the raw, without any wasted movement exerted, and with expressive gestures counting for unsaid dialogue and untold physical encounters replaced by just a nuance. A whimsical romantic notion comes from Charu just by a toss of her head upwards while simply sitting on a swing. She is taking charge of all her pent-up emotions as we imagine that we actually can see what is taking place inside her, even if nothing explicit materializes.

The final thrust of emotions erupts inside the already broken-hearted Bhupati, as he recoups his senses and composure by vacationing at a beach where his wife plucks the first gray hair from him. Bhupati returns to the house satisfied that he has worked out a plan with his wife that he run the political part of the paper they will attempt to resuscitate, while she will run the literary part.

Once home, opening the letter from Amal, learning that his cousin is living in Madras and will accept the arranged marriage that Bhupati worked out, only brings uncontrollable tears to Charu. Bhupati awakens for the first time recognizing what is happening between him and his neglected wife and he suddenly realizes what Amal means to her, as the camera just stays with him and her in a final fade out freeze-frame shot. They join hands like Michelangelo joined Adam’s hand with God, and a perfect picture is forged in our memory. The film is so deeply evocative, its expressive mood so longingly embraced, that we can only be stunned by its sheer exquisiteness, for we have come across a chaste romance that is so subtle and delicate and unique to film romance stories. We have seen how a great filmmaker can bring life out from the darkness and into the light, and we have seen a film that is timeless. 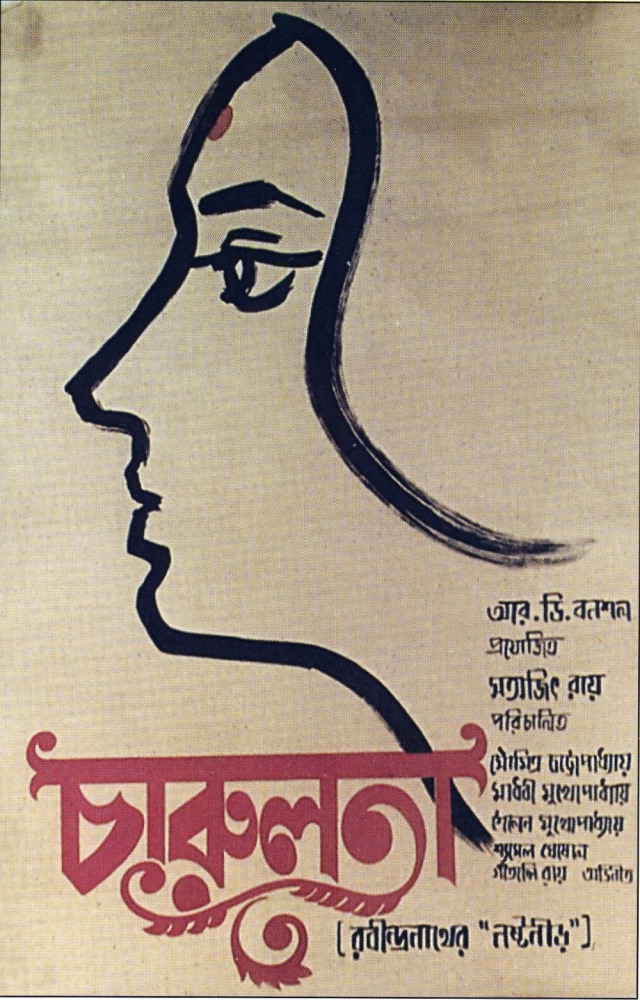